Canadian artist Clarence Ainslie Loomis was born in Toronto, Ontario, in 1917. Loomis studied at the Northern Vocational School under S. S. Finlay, and at the Ontario College of Art under J. W. Beatty. After graduating with the degree of AOCA (Associate of the Ontario College of Art), Loomis was later (1940) elected a member of the Society of Canadian Painter-Etchers and Engravers (CPE), becoming its secretary in 1943. 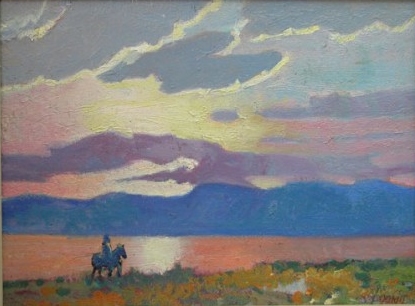 Relatively little is known about Loomis, whose small oil painting entitled “Sunset, Lake Chapala” (see image) dates from 1991 and depicts a horse and rider by the lake at sunset. 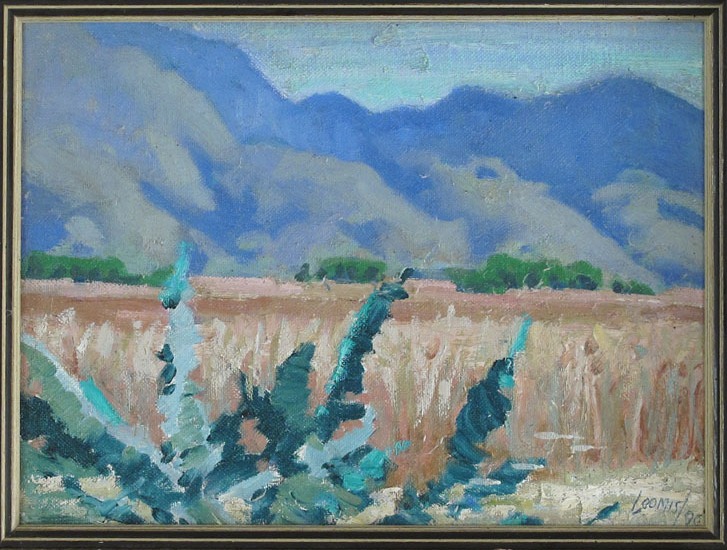 In 1947, a colored print entitled “End of Run” by Loomis was included in the Annual exhibition of the Society of Canadian Painter-Etchers and Engravers at the Art Gallery of Winnipeg.

At least one of Loomis’ works is in the permanent collection of the Art Gallery of Hamilton, Hamilton, Ontario, Canada.

In 1993, the National Art Gallery of Canada received a gift from “C. Ainslie Loomis” of Brantford, Ontario, of an album of photographs entitled The Antiquities of Cambodia, which had been published in 1867. Apparently Loomis bought this work for 75 cents in Britnell’s bookstore in Toronto when he was a university student in 1939. Today, the album is thought to be worth close to $10,000! (The Ottawa Citizen, 10 July 1994).

Note: This is an updated version of a post first published on 13 July 2014.

Sombrero Books always welcomes corrections, or any additional material, related to any of the writers and artists featured in our series of mini-bios. Please use the comments feature at the bottom of individual posts, or email us.