Accompanied by his family, multilingual Polish-born artist and educator Harry Mintz (1907-2002) was a frequent visitor to Lake Chapala from the 1970s into the 1990s. His first recorded visit was in 1974, when the local paper reported that the family was spending the summer in Chula Vista and that it was a working vacation for Harry who “hopes to complete a series of water colors while in this lakeside community.” On that occasion, the family stayed about a month before returning to Chicago with plans to revisit Lake Chapala the following summer.

The family eventually based themselves in a house/studio on the western outskirts of Ajijic at Linda Vista #14 where Harry’s large, bright studio reverberated to the sound of classical music as he worked on his oil paintings and various series of prints. In later years, he produced a series of vivid abstracts, known by his family as Paint Pours.

My father found the country and culture to be alive and real and exciting and could hardly wait for my school teacher mother to finish teaching in June so they could load the car and drive to Lake Chapala. Dad loved the markets, the streets, the people, the colors, the trees, the villages. He couldn’t get enough.”

According to his U.S. naturalization papers (filed in 1941), Mintz was born in Ostrowiec, Poland, on 27 September 1904. He is thought to have studied at Warsaw Academy of Fine Arts before crossing the Atlantic to start a fellowship in Brazil. From Brazil Mintz moved to the U.S., arriving in New York aboard the SS Southern Cross on 12 May 1924. In the U.S., Mintz studied at the Chicago Art Institute and, during the 1930s, was a registered artist for the Works Progress Administration Federal Art Project.

Mintz was certainly living in Chicago by 1932 and was still living there when he applied for naturalization in 1941. His decision to seek naturalization appears to have been motivated by his marriage to Marjory Elizabeth Carter in Chicago the previous year, on 10 February 1940. That marriage lasted about a decade.

Mintz taught art at the Evanston Art Center (1940-1970), the North Shore Art League (1950-1959) and was on the faculty of the Art Institute of Chicago (1955-1970). He was also a visiting professor of art at Washington University, St. Louis (1954-1955). He took early retirement from his teaching positions to focus exclusively on his art, which became increasingly abstract.

Mintz was a regular visitor to Mexico from the 1940s onwards, spending time in a number of places but mostly in the city of Guanajuato and the art center of San Miguel de Allende. Mintz was teaching at the Bellas Artes school in San Miguel de Allende in 1958 when he met and fell in love with Rosabelle Vita Truglio, a visiting summer student. After the briefest of courtships, they married on 1 September 1958 and subsequently had two children. Their daughter, Sari Rachel Mintz, in an interview for a Chicago style magazine, summarized her father’s reaction on meeting his soulmate:

He looked like Picasso, spoke 12 languages, met my mother in Mexico when she was 23 and he was 57, swept her off her feet, convinced her to dump a fiancé back home and married her in a month. I have one brother, and both of our birth certificates say he was 57 when we were born, so we really never knew his age.”

The article (about Sari’s very stylish Chicago home) includes a photo of a Mintz Monotype (a single print from an original painted on glass) entitled “Tree in Ajijic, Mexico” painted in 1983. 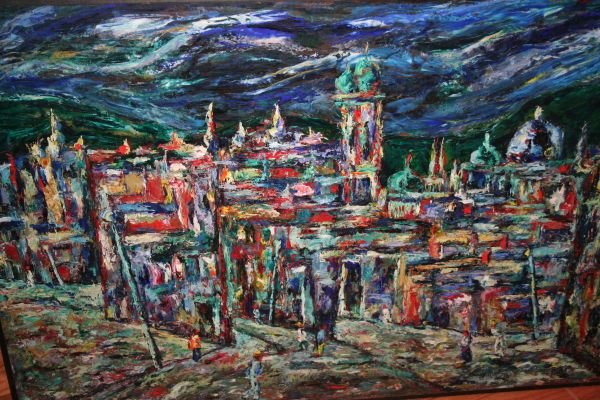 Mintz had a work selected for the 66th Annual Exhibition by Artists of Chicago and Vicinity in 1963. By coincidence, Stanley Sourelis, another artist with close connections to Chicago and the Lake Chapala area, also had a work in that show.

A large collection of documents and photographs relating to Mintz and his art are held in the Ryerson and Burnham Archives of The Art Institute of Chicago.

My sincere thanks to Sari Mintz, for her help in compiling this profile of her father, and to Jenni Mykrantz, who manages Mintz’s art estate.