Eleanor Smart (1909-1993) was an American artist who lived with her husband Douglas in Chula Vista, Lake Chapala, from the late 1960s until shortly before her death. The couple had visited the Lake Chapala area several times before purchasing the “Radke house” (Calle del Redondo #122, in Chula Vista) in 1968. She worked in a variety of media (oil, acrylic, watercolor and collage and was a regular exhibitor during her time in Mexico. 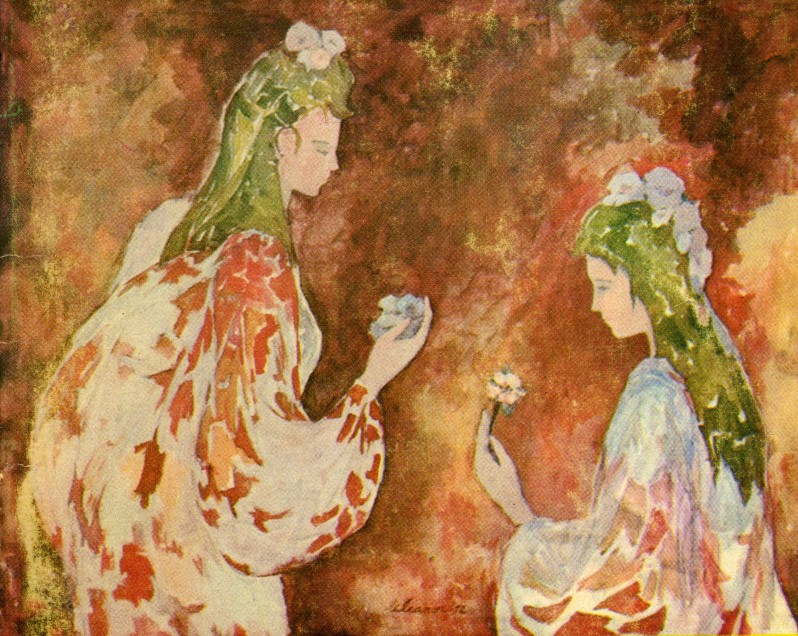 An example of Smart’s work, “Women with Green Hair” was used as the cover illustration for the locally-produced A Cookbook with Color Reproductions by Artists from the Galería (Guadalajara, Mexico: Boutique d’Artes Gráficas, 1972).

Smart’s maiden name was Eleanor Frances Storm. She was born on 6 June 1909 in Michigan, either in Washtenaw County (listed as her place of birth in the 1910 U.S. Census) or Grosse Pointe (quoted in later articles), where she lived most of her life. She died on 9 February 1993 in St. Clair Shores, Macomb, Michigan.

Though the precise timing is inclear, Smart trained at the Detroit Society of Arts and Crafts (under Sarkis Sarkisian, Walter Midener and Guy Palazzola) and at the University of Michigan, studying under Robert Brackman and Dong Kingman. She also studied, at one time or another, with Emil Weddige, Gerome Kamrowski, Hughie Lee-Smith and Kraig Kiedrowski, as well as with José Gutiérrez of Mexico City in 1951. Smart’s travels included trips to Japan, the Middle East, the Mediterranean, France, Turkey and Greece.

Smart was a member of the Michigan Academy of Science, Arts and Letters, the Detroit Society of Women Painters and Sculptors and the Grosse Pointe Artists Association. Her works can be found in many private and corporate collections including that of Monsanto Chemical Company and Detroit Bank and Trust. Smart was a regular exhibitor in the Michigan Artists Annual, the Michigan State Fair, and numerous other regional exhibitions.

By 1967, Smart had held eight one-woman shows in all, including one at the Ligoa Duncan Galleries in New York in 1959.

In 1988, one of Smart’s paintings was chosen for the “Help Save Lake Chapala” exhibit which was shown in Mexico City. Other artists in that show included Daphne Aluta, Nancy Bollembach, Luisa Julian, Conrado Contreras, Rick Ledwon, Georg Rauch, Enrique Velázquez and Laura Goeglin.