American writer Walter Willard “Spud” Johnson (1897-1968) and acclaimed poet Witter Bynner accompanied English novelist D. H. Lawrence and his wife Frieda, during most of their time in Mexico in 1923. Johnson had been a student of Bynner at the University of California in 1919 (in the same class as Idella Purnell from Guadalajara) and subsequently worked as Bynner’s secretary.

Johnson and Bynner traveled down to Mexico City in March 1923, a few days after the Lawrences; all four stayed at the Hotel Monte Carlo. At the end of April, Lawrence left Mexico City to explore the possibility of moving to Chapala, conveniently close to Guadalajara where the group had an open invitation to visit Purnell and her father. 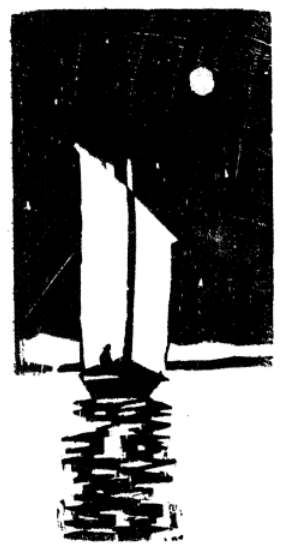 After the Lawrences left Mexico in early July, Johnson and Bynner remained in Chapala, having decided it provided the right conditions for them to mix writing with leisure.

After this visit in 1923, it does not appear that Johnson ever returned to the Lake Chapala area, though he did visit other parts of Mexico in the late 1940s and 1950s, traveling with Mabel and Tony Luhan [1], once with Lynn Riggs and once with Georgia O’Keeffe. (Bynner, on the other hand, bought a home in Chapala in 1940 and was a frequent return visitor, spending several years of his life there.)

Johnson was born on 3 June 1897 Illinois, but spent most of his youth in Greeley, Colorado. After two years at the Colorado State Teacher’s College (1916-18) and a short time at the University of Colorado in Boulder, he transferred to the University of California at Berkeley. At Berkeley, he met Witter Bynner, took his popular poetry course, and began to take poetry writing more seriously, the start of a close and lasting friendship. 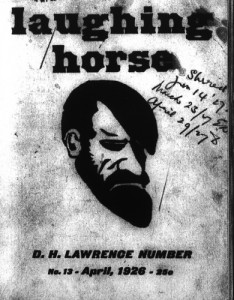 Cover of the special edition of Laughing Horse devoted to D. H. Lawrence

In early 1922, Johnson and two friends founded their own “alternative” magazine, Laughing Horse, which was published intermittently over the next thirty years. In summer 1922, Johnson left Berkeley and moved to Santa Fe, New Mexico, where he began to write poetry while working as Bynner’s secretary.

During their time in Chapala, Johnson worked on a special edition of Laughing Horse (left) as well as on poems later included in his collection Horizontal Yellow (1935).

“Mornings we all worked, Lawrence generally down towards a little peninsula where tall trees grew near the water. He sat there, back against a tree, eyes often looking over the scene that was to be the background for his novel, and wrote in tiny, fast words in a thick, blue-bound book, the tale which called Quetzalcoatl. Here also he read Mexican history and folklore and observed, almost unconsciously, the life that went on around him, and somehow got the spirit of the place.

There were the little boys who sold idols from the lake; the women who washed clothes at the waters’ edge and dried them on the sands; there were lone fishermen, white calzones pulled to their hips, bronze legs wading deep in the waters, fine nets catching the hundreds of tiny charales: boatmen steering their clumsy, beautiful craft around the peninsula; men and women going to market with baskets of pitahuayas on their heads; lovers, even, wandering along the windy shore; goatherds; mothers bathing babies; sometimes a group of Mexican boys swimming nude off-shore instead of renting ugly bathing-suits further down by the hotel…

Afternoons we often had tea together or Lawrence and I walked along the mud flats below the village or along the cobbled country road around the Japanese hill – or up the hill itself. We discovered that botany had been a favorite study of both of us at school and took a friendly though more or less ignorant interest in the flora as we walked and talked. Lawrence talked most, of course.”

By 1926 Johnson’s work had been published in Poetry, Pan, Echo, Palms (the poetry magazine started by Idella Purnell), and the New Republic. He published a collection of fifty-six poems, some new and some reprinted from various publications, in 1935, entitled Horizontal Yellow. He also made numerous contributions to The New Yorker, Sunset Magazine and Taos Valley News.

By 1927, Johnson’s relationship with Bynner had weakened (though they remained friends) and he became the secretary to Mabel Dodge Luhan [1] in Taos, New Mexico.

By the early 1930s Johnson had become a fixture in the New Mexico literary and social scenes, dividing his time between Santa Fe and Taos. He continued to write for local papers and ran a small hand printing press. In his fifties, he took up drawing and painting. He died in 1968, still planning a show of his artwork. The show was still held, becoming a fitting memorial to the life and work of this talented writer.

[1] Mabel Dodge Luhan (1879-1962) was a wealthy American patron of the arts who, among other claims to fame, had sponsored Lawrence’s initial visit to Taos in 1922-23. She had moved to Taos in 1919 (as Mabel Dodge Sterne) with her then husband Maurice and Elsie Clews Parsons, to start a literary colony. Mabel took the advice of Antonio (Tony) Luhan, a Native American, to buy a 12-acre (49,000 m2) property. Soon after, she sent Maurice packing (with a monthly allowance) and in 1923 married Tony Luhan. Mabel Luhan later wrote a memoir about Lawrence’s visit entitled, Lorenzo in Taos (1932). The Luhans hosted numerous influential writers, poets and artists, at their home, The Mabel Dodge Luhan House, since designated a national historic landmark, and now an inn and conference center.