What makes Barker a worthy inclusion in our series of mini-biographies of artists and authors associated with Lake Chapala is his editing and translation of a performance of a nativity play or pastorela in the village churchyard that he saw on Christmas morning 1948.

Barker was visiting Chapala in the company of Hugh S. Lowther, Professor Emeritus of Classical Languages at Occidental College, Los Angeles, and his wife, María López de Lowther, Assistant Professor of Spanish, Emeritus, at the University of California, Los Angeles. 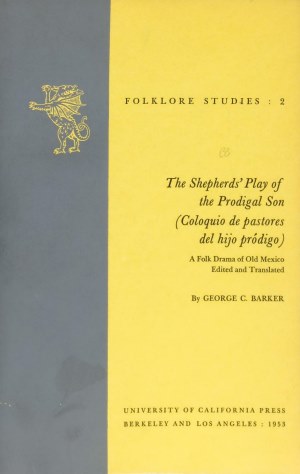 The trio of academics witnessed the play which was performed outdoors, with no platform, stage or curtain and lasted about two and a half hours. The cast of about twenty performers, mostly teenage boys and girls, was “surrounded by a crowd of spectators, all but a handful of whom were Mexican people. Some of the men in the audience sat or stood on top of a high wall enclosing the churchyard, and small boys perched on branches of a tree overlooking the performers. Several women stood throughout the performance with infants strapped to their backs. To prevent the audience from pressing in too close upon the cast, the hermit periodically patrolled the circle with his flagelot poised to swat any overbold onlooker.”

The shepherds and shepherdesses “were beautifully dressed in flowing white robes and carried long staves or crooks brilliantly festooned with ribbons, bells, and paper flowers.”

Excluding short choral interludes, “the only break in the performance occurred when the bells in the church towers directly overhead pealed out the call to High Mass. The noise was so deafening that even the chorus could not be heard. To fill the gap, the hermit improvised a clever pantomime, alternately stopping his ears and shaking his fists at the bells, much to the delight of the audience.”

After the performance, Barker was able to obtain “the old copybook containing the long-hand Spanish text… from the play’s ensayador, or rehearser, Aristeo Flores, who also played the part of Lucifer in the production. Flores was a shopkeeper about forty-five years of age who lived in the neighboring village of El Salto. He told Mrs. Lowther and me that he had transcribed the text [in about 1914] when he was a schoolboy in the village of Ocotlán, Jalisco. He said he was aided by his schoolmaster and by old people in the village in writing down the lines of the play.”

Barker’s 167-page translation and analysis was published as The shepherds’ play of the prodigal son: A folk drama of Old Mexico (University of California Publications: Folklore Studies, No. 2, Berkeley and Los Angeles: Univ. California Press, 1953).

This work was described in a review by Frank Goodwyn in Western Folklore (1954, p 220):

This is an unusually full and well-written version of the nativity play traditionally given on Christmas morning in Spanish-speaking countries…. Barker has made a close translation of the play and presented it in parallel text, thus making it intelligible to the English-speaking reader without losing the flavor of the original tongue. Barker concludes that “this version is more Mexican than Spanish”. “There is also a description of the play’s presentation on Christmas morning, 1948, at Chapala, Jalisco, Mexico, from the manuscript which Barker subsequently obtained and reproduced.”

Publicity material accompanying the book’s release described it as, “containing the text of an old Mexican folk drama”… [that] “belongs to class of religious folk dramas introduced into Mexico in the sixteenth century. They were patterned after the Miracle Plays produced in western Europe during the Middle Ages”.

Barker’s account of the nativity play at Chapala is far from the earliest reference to the peculiarities of Christmas festivities in Chapala. For example, celebrated anthropologist Frederick Starr, who visited Chapala several times, described what he termed a “Passion Play”, the Pastores (Shepherds), that he had witnessed in December 1895. Starr considered the performance to be “probably entirely foreign” compared to Tastoanes and Conquista which combined Indian and imported elements. According to Starr, “The play is fairly recent at Chapala. Only a few years ago a young fellow from the village saw it at some other town; he learned it by heart and trained his band of actors. This illustrates the way in which dramas travel – even in Mexico – from town to town.”

In 1947, the year before Barker visited Chapala, Norman Pelham Wright had published Mexican Kaleidoscope, in which he argued that the words of what he called the Chapala Christmas dance were “sheer gibberish”:

“The traditional dances themselves are in most cases hopelessly corrupt. The formal Spanish blank verse which is orated at the Chapala Christmas dance, for instance, is sheer gibberish, which has been passed on verbally from one generation to another, and never entrusted to writing; in the dance, Malinche is confused with the Virgin Mary, Moctezuma with Pontius Pilate, and Hernán Cortés with Christ, in a weird jumble of ideas relating both to the Conquest and to the life of our Lord. There is no reason to suppose that the music has not suffered similarly.” 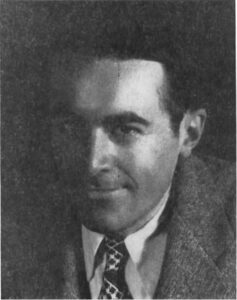 It is tempting to speculate that perhaps Barker wanted to judge the authenticity of the play in Chapala for himself after reading Wright’s words which surely would have made any anthropologist interested in Mexican traditions curious to learn more.

Barker concluded from his detailed textual analysis that the pastorela he had seen and analyzed incorporated numerous elements from Europe and was among the least corrupt of the thirteen pastorelas previously recorded from Mexico or the southwestern part of the U.S. Even so, it was “largely of Mexican origin”, as evidenced by references in the play to such things as pulque, tacos, baúles de colaciones (Christmas sweetmeats), coyote, tepejuage, birria and panela.

At UCLA, his research focused on Mexican-American youths in the Los Angeles area, though he never lost his interests in folklore and the religious ceremonies of various Southwest Indian tribes, including the Yaqui Indians of Sonora, Mexico.

He was a member of various professional societies in several fields, including the American Anthropological Association and the Asociación Española de Etnología y Folklore (Madrid).

The Papers of George C. Barker now reside in the Special Collections at the University of Arizona Libraries.