Wow! Lake Chapala connected to Abraham Lincoln? Well, yes, albeit in a somewhat tenuous, roundabout way that I will now attempt to explain.

The key character in this story is Rixford Joseph Lincoln, who was born into a prominent New Orleans family on 22 August 1872. His father, Lemuel L. Lincoln, had been a Major in the confederate forces before becoming the commercial and financial editor of the city’s leading daily, the Times-Democrat. Rixford’s mother died when he was young and he was raised by an aunt, Suzette Helluin. The family was not directly related by blood to Abraham Lincoln but, as we shall see, it is possible to link Rixford Lincoln to the famous U.S. president and one part of the link also involves Lake Chapala. 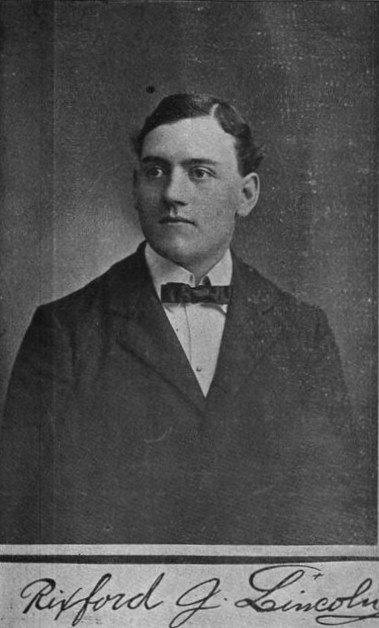 Rixford gained both a B.A. and M.A. from the Jesuit college in New Orleans and worked as an assistant to his father before completing his studies in law at Tulane University, from which he graduated in 1899.

He started to write poetry at an early age and his family’s newspaper connections undoubtedly helped bring his work to a significant audience. Indeed, Rixford was considered the poet laureate of the Louisiana Historical Society and wrote (and read) poems to commemorate important events, such as the opening of the New Orleans Museum of Art in 1911 (“Long will this art museum stand in pride / While throngs will daily pour into its door / The Muses to live and speak out from the paint / And spread her mystic light from dome to floor”) and at the dedication of the oak grove in the Audubon Park in New Orleans in 1919, a memorial to 62 local men who gave their lives during the first world war.

Rixford Lincoln was the author of several books including Poems and short stories (1900); Prose Poems (ca 1906); Historical New Orleans (in verse) (ca 1911); War Poems, Indian Legends, and a Wreath of Childhood Verses (1916); Verses to a Child (1922) as well as numerous newspaper articles and several other undated pamphlets of poetry.

Lincoln was obviously familiar with Lake Chapala (though how and when is unknown) since among his many poems is this one about the lake, published in 1908:

Sweet Mexic lake, beloved Indian spot,
Where forests spread upon the mountain side,
Whose emerald peaks, of softest hue divine,
Reflect themselves in thee, with silent pride.

How fair thy waters roll upon the shore,
With music tender, breathing from the deep;
Where sail the vessels, tossing on thy breast,
And balmy breezes woo the spirit sleep.

Enchanted highland lake, beloved so well,
How grand when cloud and mountain flood with light,
With colors mingling tints of sky and sea,
When sol is sinking on the heart of night.

Bewildering sight, which dazzles mem’ry yet,
O’erreaching haciendas, fields and plain;
Alluring air of Mexico’s soft sea,
Let me of all they glories dream again.

In 1928, after working as an attorney and newspaper man in New Orleans for some thirty years, Rixford Lincoln accepted a position teaching English and French at the boarding school attached to Holy Cross Abbey in Cañon City, Colorado.

Though the motives behind his later movements are unclear, by 1935 Rixford Lincoln was living in St Bernard, Cullman, Alabama, and, by the time of the U.S. Census in 1940, in Pasco, Florida. He died in Illinois on 22 October 1962 at the age of 90.

And the connection to Abraham Lincoln? Well, there are two distinct links. The first is that Rixford Lincoln also wrote a poem entitled “Abraham Lincoln”, published in the Cullman Democrat (Alabama) in 1936. That poem (quoted in Schwartz, 2011) ends with the plea made by so many in the run-up to the second world war:

Would that you could rule us today
When wracked the world in woe
Oh, guide us from afar, we pray
Wisdom on us bestow.

And the second connection? Rixford Lincoln, the poet and son of Major Lemuel L. Lincoln, was an usher at the colorful wedding in New Orleans of Laure Jaubert and John Virgil Dugan, who had previously worked for the son of Abraham Lincoln….