Poet and politician Salvador Escudero was born in the south of Jalisco, at San Gabriel, on 22 April 1883 and died in Mexico City in January 1946. Escudero was a much-published poet and prime mover in the Jalisco intellectual circles of his time.

As a young man, Escudero was the boyfriend of Jalisco-born model and novelist Lupe Marín (who later became the second wife of muralist Diego Rivera).

Escudero was considered an “exquisite romantic poet”. Despite the fact that he lived a humble and simple life and never had any grand pretensions, his supporters in Chapala ensured that he was, briefly, governor of Jalisco in 1920. 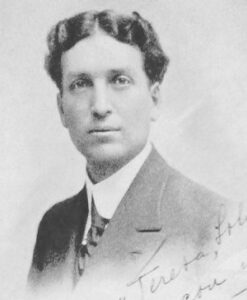 After the Mexican Revolution began in 1910, Escudero joined “the cause” and soon found himself working alongside Adolfo de la Huerta, who became his friend and protector. After witnessing first-hand some of the battlefield horrors of the Revolution near the city of León in Guanajuato, Escudero traveled with de la Huerta to Veracruz and later to Hermosillo, Sonora, as de la Huerta’s private secretary.

In Veracruz, in November 1915, Escudero was working with the Interior Ministry (Secretaría de Gobernación). In his spare time he founded and published a literary magazine Faros. He published many of his own poems (many of them classical 14-line sonnets) in Faros as well as in local Veracruz newspapers.

After de la Huerta was appointed governor of Sonora, Escudero accompanied him to the state capital of Hermosillo. Escudero was so impressed by the beauty of the local girls that he began a series of sonnets, each extolling the virtues of a single member of the fair sex. It was while living in Hermosillo that Escudero won a national poetry prize for a poem entitled “No escuche quien no sabe de estas cosas”.

Escudero never sought fame or glory but wrote purely for the sake of writing. Contemporaries considered him a civic-minded individual who always tried to help others. He was also a passionate fan and supporter of bullfights.

In August 1920, at the end of the Mexican Revolution, Escudero was a candidate for the governorship of Jalisco. When his rival Basilio Vadillo was declared the winner, Escudero’s supporters established an alternative state government, based in Chapala, which was quickly disbanded by federal authorities acting on behalf of President Álvaro Obregón.

His poems include one entitled “Al Lago de Chapala” (“To Lake Chapala”) which, according to Chapala archive chronological notes, was published in El Monitor on 30 October 1910: