Photographer and hotelier Winfield Scott was born in Galesburg, Michigan, on 15 July 1863 and died in Los Angeles, California, on 19 January 1942. 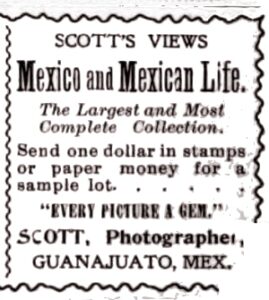 Scott spent six months in Mexico in 1888, and then lived in the country, with occasional breaks in California, from 1895 to 1924.

From 1890 to 1894, he was working in Oakland, California. In 1894, he spent a weekend in jail when an aggrieved ex-colleague, unhappy about the terms of a business deal, denounced Scott for taking and possessing “indecent” photographs. A contemporary news report described them as “obscene photographs of semi-naked young Chinese girls” between 10 and 14 years of age. Scott was freed and exonerated because it proved impossible to find any such photos in his possession.

This may well have been the stimulus, if any was needed, that prompted Scott to move to Mexico in 1895 and settle in Silao, Guanajuato, where he undertook photographic commissions for the Mexican Central Railway (Ferrocarril Central Mexicano) and, from January 1897, for the National Railways (Ferrocarriles Nacionales). He is known to have photographed the famous Guanajuato mummies. He also sold some photos in 1896 to the Field Columbian Museum in Chicago.

His railway-related images include photos of canyons, stations, rural landscapes, and everyday life of the people living close to the tracks. By 1897, an advert in Modern Mexico (January 1897) claimed that he had amassed “the largest and most complete collection of scenes of Mexico and Mexican life”. In that same year, Wilson’s photographic magazine called him a pictorialist photographer and publicized his hundreds of images of Mexico and the U.S., with 5×8 prints on sale by mail order for $3 a dozen.

On 21 October 1898, now 35 years of age, Scott married 18-year-old Edna Browning Cody in the city of León, Guanajuato. Edna was from Lakeview, Michigan, but lived with her parents in the mining camp of Mineral de Cardones in Guanajuato.

By 1900, he and his wife (now known as Edna Cody Scott) lived in Ocotlán, Jalisco, on Lake Chapala, where he advertised the sale of “true portraits of the life and landscape of this country of unparalleled picturesqueness.” 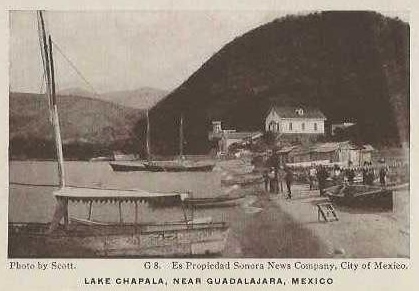 Several of his photos, including a panoramic view of Chapala, were used to illustrate A tour in Mexico, written by Mrs James Edwin Morris (The Abbey Press, 1902).

A 1903 list of Scott’s Views of Mexico (published in Ocotlán, Jalisco) has 2486 numbered titles for Scott’s Mexican photographs, together with a testimonial attesting to their quality from Reau Campbell, of the American Tourist Association, author of Campbell’s New Revised Complete Guide and Descriptive Book of Mexico (1899). 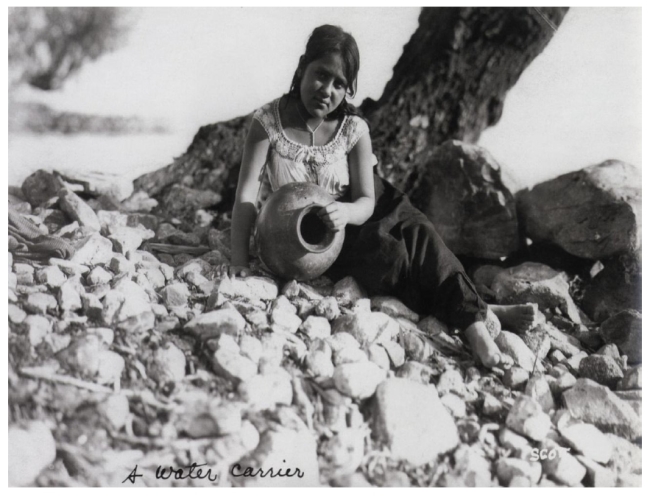 Scott’s photographs were in wide demand for postcards. Three small photographs of Chapala, all by Scott, were used on one of the first postcards published by Juan Kaiser (with the imprint “Al Libro Mayor, S. Luis Potosí.”) in about 1901.

Scott’s specialty was the portrayal of women and children, as well as landscapes, and Mexico’s national photographic archive holds no fewer than 223 female portraits taken by Scott. Many of his portraits are exceptional in composition. Scott was one of the first of Mexico’s commercial photographers to pay as much attention to the context and surroundings as to the subject. His success in this regard is partly attributable to his rapid adoption of smaller and lighter cameras. 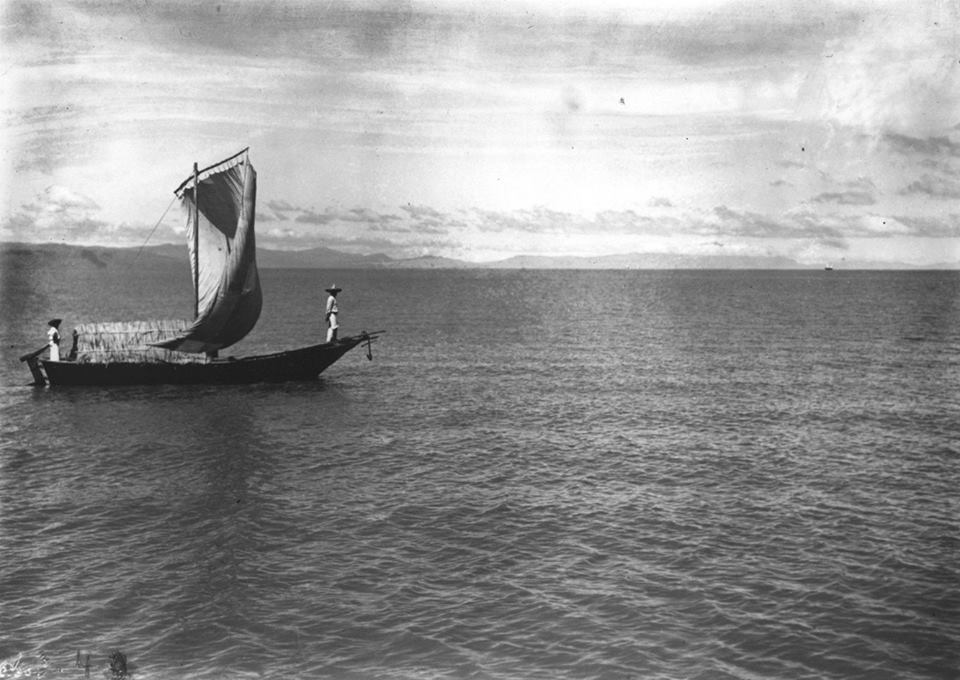 In 1908 Scott’s photographs were used to illustrate an account in Modern Mexico about the Colima-Manzanillo railway, then under construction but due to be completed in time for Mexico’s centenary celebrations in 1910.

During his time in Mexico, Mexico Scott collaborated with fellow photographer Charles B. Waite. The two photographers offered, in the words of photographic historian Rosa Casanova, images specially chosen to appeal to an English-speaking audience: “a ‘costumbrista’ vision of the landscape, monuments, and people of the country, producing an imagery that was also adopted in Mexico, thanks to their widespread circulation in the form of postcards produced first by the Sonora News Company and later on by La Rochester.”

Winfield Scott had separated from his wife, Edna, by about 1905. (Edna Cody Scott died in San Francisco in 1957). He then began a relationship with Ramona Rodriguez. Their daughter, Margaret (“Margarita”), was born in Mexico in 1906. Witter Bynner and others say that Scott’s wife (Margaret’s mother) was Mexican and had died when Margaret was young (definitely before 1920).

When the Mexican Revolution broke out in 1910, Scott moved to California, but returned in 1912, and then divided his time between California and Mexico until 1924. When applying in 1921 (in the U.S.) for a new passport so that he can return to Ocotlán, he described himself as 5′ 5″ tall, with light blue eyes and brown hair. 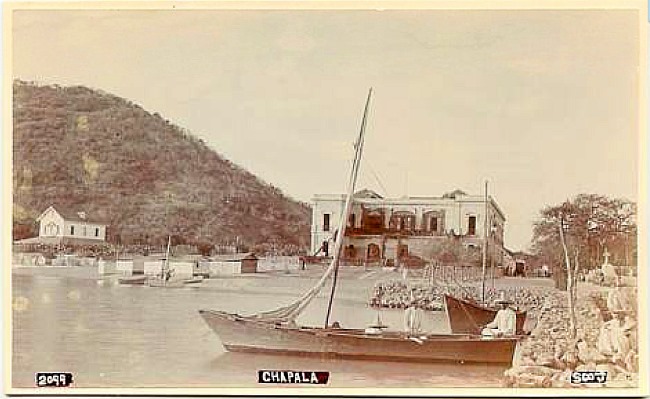 From 1919 to about 1922, Scott was managing the Hotel Ribera near Ocotlán, the source of stories Scott shared with D. H. Lawrence, his wife Frieda, Witter Bynner and others in 1923.

By 1923, Scott had been widowed and was manager of the Hotel Arzapalo in Chapala, living there with his daughter Margaret in rooms on the west wing facing the lake. D. H. Lawrence used Scott as the basis for the hotel owner Bell in his novel The Plumed Serpent. Lawrence’s traveling companions Witter Bynner and Willard “Spud” Johnson stayed at the hotel, which was conveniently close to the house that Lawrence and his wife Frieda had rented.

In his memoir Journey with Genius (1951), Witter Bynner devotes chapter 16 to the Hotel Arzapalo and chapter 22 to Mr. Winfield Scott. He includes a detailed account of Scott telling them about how, while managing an hotel in Ocotlán, he narrowly escaped from bandits on one occasion. (Bynner, pp 110-114)

Elsewhere, Idella Purnell, a Guadalajara poet who spent time with Lawrence, has written about how she and Margarita Scott accompanied the Lawrences by boat to the railway station in mid-July 1923, when Lawrence and his wife Frieda left Chapala to return to Guadalajara and then New York.

Later that year, when Lawrence and Kai Gøtzsche visited Guadalajara in October 1923, they chose to stay at the Hotel García because Winfield Scott had now moved from Chapala and was managing that hotel. Scott did not remain at the Hotel García for long. By the end of the following year, he had moved back to California, where he lived until his death in 1942.