Where’s Annie? (Random House, 1963) is a novel entirely set in Ajijic, and based, at least in part, on characters and events witnessed by author Eileen Bassing during her residence in Ajijic, with two sons and husband Bob, from 1950 to 1954. In many ways, Where’s Annie? is timeless, touching on so many themes that have recurred and continue to recur in the lives of Ajijic residents. 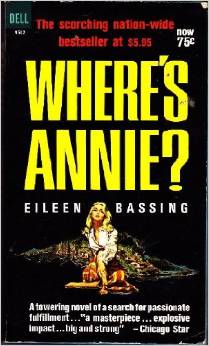 The book opens with a description of the tensions created between a retired American naval officer and his much younger wife, the “Annie” of the title. All the main characters are expatriates from the United States. The cast of characters includes a middle-aged female novelist (Victoria Beacon) who has moved to Mexico in search of inspiration for her next novel; a cold, success-hungry young painter; a Negro guy hoping for self-fulfillment before his impending death from a brain tumor; and a group of young men addicted to jazz and drugs. As a contemporary review so aptly describes the Ajijic expatriate community “… most of them think of themselves as artists, and about half of them are.”

Where’s Annie? looks at some of the underlying tensions between local villagers and foreign incomers in Ajijic. Some expatriate residents choose to ignore such tensions and deny their existence, but this book proves that some things really have not changed much in the past fifty years!

The differences between the villagers and foreign settlers are bridged not only by maids and gardeners but also by the local medic, Dr. Obregón, who has to provide medical advice and comfort to both sides. The doctor, however, is torn between his love for his wife and his infatuation with Victoria Beacon.

There is an exciting array of characters and, as one reviewer put it, Eileen Bassing “writes with sympathy and insight–and without sentimentality or facile sensationalism.” The atmosphere is a heady mix of drink, drugs and intrigue, laced with jazz and attempts at literature, with all the forerunners of an A-set developing among the American residents.

Any hope of equilibrium is disturbed by a powerful rich newcomer who buys up properties, evicts some impoverished renters from their homes, and reports people to the authorities, hoping to get them deported. Money lending and shady real estate deals, such as those involving the use of borrowed names “prestanombres”, complete the picture. Betrayal, mayhem and even murder–nothing is too much for this motley crew of foreigners trying to escape from past memories and deeds.  As a reviewer in Harper’s put it, Victoria Beacon eventually becomes aware of “how deeply she has been drawn into their sordid maelstrom and how destructive their whole way of life is.”

Some of the book’s characters can readily be identified as based on real people living in Ajijic at the time. For example, the woman novelist Victoria Beacon was based on Leonora Baccante, a fiction writer, and the rather unflattering portraits of Willie Chester and his wife Sam in the book are based on Willard Marsh, author of Week with No Friday (published in 1965) and his actress-turned playwright wife George. Marsh retaliated against the Bassings in his own novel by describing the wife of a minor character, Beau Blissing, as “a lady novelist with a lousy memory” (82-83).

Despite various newspaper reports that Where’s Annie was to be turned into a movie, that never happened. For instance, the 11 February 1963 edition of Daily Notes, published in Canonsburg, Pennsylvania, noted that “Robert Bassing will both write and produce the screen version of Eileen Bassing’s Book of the Month Club novel, “Where’s Annie?”. Eileen is Robert’s wife. This will be Bassing’s first effort as a producer and he has formed Robert Bassing Productions for the film, which will be shot in Technicolor on location near Guadalajara.”

The following month, it was reported that “Bob Bassing is after Anne Bancroft to star in “Where’s Annie?” after she finishes “Mother Courage and Her Children” on Broadway…” (Pasadena Independent, 9 April 1963). Perhaps financing proved to be the stumbling block? Whatever transpired, the movie was never made.

Other twentieth century novels set largely, or entirely, at Lake Chapala include: