Journalist and novelist Bart Spicer was born Albert Samuel Spicer on 13 April 1918 in Richmond, Virginia. He legally changed his name to Bart in 1964. He was married to Betty Coe, and died 15 February 1978 in Tucson, Arizona.

While the precise dates are unclear, Spicer certainly visited Ajijic several times, mainly in the early 1950s, and usually staying at the (old) Posada Ajijic. An author profile in a 1953 issue of Library Journal reported that Spicer was “holed up down in Mexico writing full-time.”

Spicer incorporates scenes set in Chapala, Guadalajara and Mexico City into his 1955 spy novel The Day of the Dead.

Bart Spicer spent his early childhood “in various parts of the British Empire”, and would later claim to have lived in England, India, Africa, France, Spain, Mexico and many parts of the United States. He was a journalist and radio news writer, prior to enlisting in the US Army during World War II. After the war he worked for three years in public relations for Universal Military Training and a year for the World Affairs Council. His first book, The Dark Light, was published in 1949, at which point he became a full-time novelist.

By the late 1950s, the Spicers were living in New York City where Bart was a member of the Players Club (jazz). In the mid-1960s, they moved to Spain, where they lived in Torremolinos and Malaga. In 1977, medical reasons forced them to return to the U.S. They settled in Tucson, where Bart died the following year. 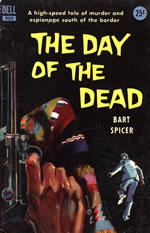 The striking cover design (left) of the 1956 Dell imprint of The Day of the Dead is attributed to Arthur Sussman (1927-2008). Sussman was born in Brooklyn, New York, and after completing a BFA at Syracuse University, worked in New York from 1951 to 1960 as a designer and illustrator. He spent the winter of 1960-1961 in Taxco, Mexico. After 1960, he devoted himself more to his fine art, and held numerous solo exhibitions in Mexico and the U.S. between 1961 and 1991.

Most of the early action in Spicer’s first spy novel The Day of the Dead (1955) is set in Guadalajara. The city’s Country Club, University, Parque Revolución, the U.S. Consulate, Hotel del Parque and fictional “Mercado Mexico” all feature in the novel.

The book is a tale of international intrigue and betrayed friendships. A retired spy and war-wounded Colonel Peregrine White (“Blanco”), who walks with a cane, is called back into service by a dour FBI agent Castle, to thwart a suspected Communist takeover of the Mexican government. Castle believes that one of the ringleaders is White’s best friend Paco Morado, a teacher at the university.

As the plot thickens, White attends a lively party at an expat-owned house on the lakeshore in Chapala, where the lake is fully “200 yards from its former shoreline”. (The lake was at its lowest ever level in 1954/55). One of the party-goers is looking for investors in a plan to “buy the old railway station, put in a pool and a nine-hole golf course and start a club.” (p 71). (In 1955, the old railway station became the clubhouse of the Chapala Country Club, with its nine-hole golf course in the adjacent grounds; the club was later relocated further east near San Nicolas de Ibarra. The former railway station is now a museum and cultural center.)

Most of the later scenes in the book play out in Mexico City. The language of The Day of the Dead now seems stilted at times, and the plot is dated, but the book was well received at the time, and still worth a read.