Dr. Leo Leonidas Stanley (1886-1976) visited Guadalajara and Lake Chapala in October 1937 and kept a detailed diary of his trip. Stanley was the physician for the California State Prison at San Quentin from 1913 to 1951, and was a meticulous observer. Fortunately for us, his detailed typewritten account of his trip, illustrated by dozens of superb photographs, survives to this day in the archives of the California Historical Society.

Stanley was attending the annual conference of the Pacific Association of Railway Surgeons, held that year in Guadalajara. While in the city he met up with José Alonzo, a former San Quentin inmate who had worked as his medical assistant during his incarceration. The two men had exchanged letters after Alonzo’s parole in 1932. Alonzo had returned to Mexico and settled with his wife in San Juan de los Lagos. After the conference, Alonzo accompanied Stanley on his trip to Lake Chapala.

Just getting to the lake posed its own challenges in 1937. One photograph shows part of a timetable for buses from Guadalajara to Chapala. The first truly regular bus service to Chapala had only just been established by the Cooperativa Autotransportes Guadalajara Chapala y Anexas, S.C.L. (now Autotransportes Guadalajara Chapala, S.A. de C.V.). The company ran hourly buses each way from 7.00am to 8.00pm. Passengers paid $1.50 (pesos) one-way, $2.50 return. [1] 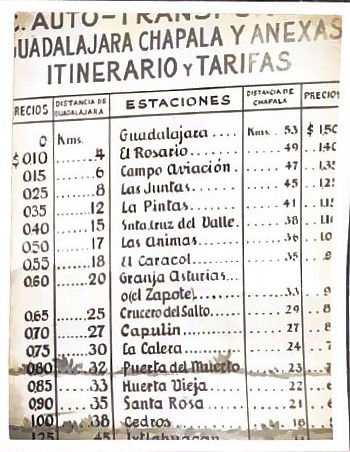 Alonzo and Stanley caught the 9.00am bus for Chapala. The crowded, ramshackle, bus broke down part-way there and the passengers were asked to get out and push. Eventually the next bus arrived and everyone was able to get to Chapala in time for lunch.

Alonzo and Stanley hired a guide (Ramón), a horse and two mules so that they could ride west to Jocotepec and then explore part of the lake’s southern shore. Stanley quickly realized that,

“The road, or trail, around the lake was very rough and narrow, and evidently was used only for burros and oxen. It certainly could not have been used for any vehicle.” Stanley did not have time to stop in Ajijic as he rode along the track that skirted the lake, from village to village, to stay overnight in Jocotepec. He did remark, however, on the many groves of papaya, and mangoes, fields of corn, and small plots of beans and garbanzas (chickpeas) that he saw near Ajijic, and the number of campesinos who were cultivating their plots with animal-drawn wooden ploughs.” [2]

We will look more closely at selected portions of Stanley’s trip in later posts.

But just who was Leo Stanley? Born in Oregon, Stanley was raised in San Luis Obispo County, California. He was awarded his bachelor’s degree at Stanford University in 1903, and during later studies at Cooper Medical College, he served his residency at San Quentin State Prison. In 1913, he was appointed the prison’s Chief Physician and Surgeon, a position he held —with the exception of the war years— until 1951. Stanley’s experiments on prisoners at San Quentin, especially those involving testicular transplants, were highly controversial and attracted national media attention. [3]

Stanley was an inveterate traveler and saw, and wrote about, many parts of the world. In the mid-1950s he was the ship’s doctor for various luxury cruises. Wherever he went, Stanley took a keen interest in the local prisons and work camps.

Stanley wrote several books, including Men at Their Worst (1940), My Most Unforgettable Convicts (1967), and San Miguel at the Turn of the Century (1976).

He spent the final years of his life writing and working on his farm in Marin County, California.