The following excerpts come from the detailed account written by Dr. Leo Leonidas Stanley (1886-1976) after visiting Lake Chapala in October 1937. (For ease of reading, accents and italics have been added and spelling standardized.)

On 11 October, Stanley and his two Mexican companions, José Alonzo and Ramón, rode from Chapala to Jocotepec, where they found somewhere to stay overnight and then went out for a walk:

It was only a block to the plaza, with its bandstand and garden. There was quite a crowd of people walking about, and in front of a building, evidently a show piece, the nondescript band was playing. Around the edges of the plaza were numerous small stands where oranges, bananas, and various fruit, together with soft drinks, were being vended. We went to a corner restaurant, or fonda. It was far from clean, but was the best that the town furnished, flies were in preponderance, but after our long ride of about twenty miles the first day, we were fairly hungry. Alonzo and Ramón ate the full bill of fare, but I was satisfied with some tortillas, hot beans, a little stewed meat, and plenty of water which I ordered to be boiled. The boys evidently were satisfied with their repasts. 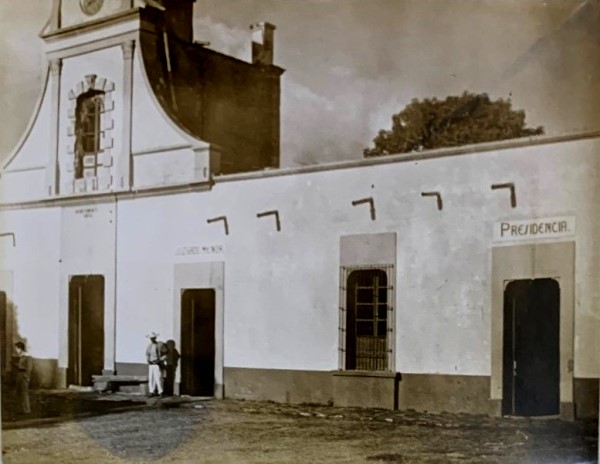 On this night there was a show in town, and on the street corner was a little Mexican who, through a megaphone, announced to the assembled groups in the plaza that this great spectacle was to take place, that in the show was a renowned professor who could read the past, present and future, that this show was one which no one could afford to miss. Its spieler advised that, instead of spending their money for fruit and sweets in the plaza, they should spend it going to this world renowned show. The little fellow really put in a great deal of effort persuading the townspeople to come. In the meantime, the band gave forth its music. [49-50]

The following morning (12 October 1937) the three men were up and about even before it got light:

We went out into the starlight toward the plaza, in order to buy some feed for the horses. A few people were already on the streets, but the feed store did not open until six—thirty. We spent the next half an hour in our room by candlelight, adjusting the stirrups and making the saddles more comfortable. Upon going to the plaza again just before daylight we met some Mexicans who told us that a man had been killed the night before, and that his body was lying in the patio of the jail.

We went over to the Presidencia, and there we met the Comandante. Alonzo told him who we were, and that we would like to see the defunto or dead man. There was a squad of about ten Mexicans in the patio, dressed in their broad sombreros, and covered by serapes. They each had a rifle and really looked quite dangerous, and none too careful with their firearms…. 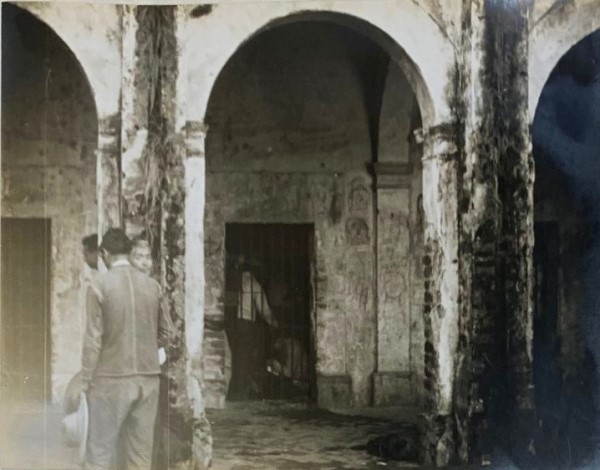 … we went into the patio of the jail, and there found sprawled out on his back, the blood—covered body of a short, middle-aged Mexican. His large sombrero, covered with blood, lay on the flagstones near him. He wore white soiled pantaloons rolled to his knees, and a soiled shirt open at the front. He had a large cut over his left wrist which had almost disarticulated the joint. Over his breastbone and through it was a deep stab wound which had gone entirely through the breastplate and entered the heart. In addition to this, he had been shot through the head. His assailant wanted to be sure that he was dead…..

With this rather auspicious, and perhaps awe-inspiring beginning of our second day in the country, we felt it would be well to go over to the fonda and have a bite of breakfast. [51-52]

Stanley also describes the family who had been their overnight hosts:

All of the family at the home of Señora Theresa Medina at Calle Matamoros No. 6, were awake and interested in talking to us. There were three very bright and alert girls, and four or five boys of school age. I took a number of pictures of them, and talked with them for some time. Having been told that I was a doctor, almost all of them wished to have me prescribe or examine…. The three pretty girls had finished all the schooling which they could acquire, and were waiting until some village youth might claim them in marriage. One of them, a rather tall and intelligent señorita, said, however, that she was not at all interested in marriage, that she did not like children, and that she hoped to get away from Jocotepec at her first opportunity. They were all quite happy, and were greatly entertained by talking with the gringo from Los Estados Unidos. [53-54]