American artist Marion Greenwood (1909-1970) was definitely in Chapala at least once, as evidenced by a water-damaged drawing entitled “Chapala girl”, dated 1969 and offered for sale on EBay in 2017.

Greenwood traveled south of the border for the first time in December 1932 and spent several years in Mexico, where she is best known as a muralist.

Born in Brooklyn on 6 April 1909, Greenwood displayed artistic talent from childhood. She left high school at age 15 to attend the Art Students League in New York where she studied under John French Sloan and George Bridgman. She also studied lithography with Emil Ganso and mosaic with Alexander Archipenko.

While still only a teenager, she made several visits to Yaddo, an artists’ retreat in Saratoga Springs, New York, to meet fellow artists and paint portraits of visiting intellectuals. A portrait of a wealthy financier gave her the funds to travel to Europe where she studied briefly at the Academie Colarossi in Paris.

In 1930 she was back in New York and drawing theater-related sketches for The New York Times.

The following year she made the first of several trips to the Southwest to paint Navajo Indians. From there she drove to Mexico City where she met artists Leopoldo Mendez, Alfredo Zalce and Pablo O’Higgins, who had worked with Diego Rivera and introduced her to fresco painting.

Greenwood spent some time experimenting in Taxco in 1932, where she completed a fresco of native life on the stairwell at the Hotel Taxqueño. After returning to Mexico City, she was introduced to Gustavo Corona Figueroa, the rector of the Universidad Michoacana de San Nicolás de Hidalgo (in Morelia, Michoacán), the oldest institution of higher education in the Americas. Milan commissioned Greenwood to paint some frescos in the university and Greenwood decided to portray the everyday lives of the local Tarascan people.

Marion’s older sister, Grace Greenwood, also an artist, had joined her in Mexico City and both women had become members of the Liga de Escritores y Artistas Revolucionarios (League of Revolutionary Writers and Artists) to which Diego Rivera and many other famous artists belonged. In 1934, a group of Liga artists was commissioned to decorate the newly-constructed Mercado Abelardo L. Rodríguez in downtown Mexico City. The artists involved were Pablo O’Higgins, Ramón Alva Guadarrama, Antonio Pujol, Pedro Rendón, Miguel Tzab Trejo and Angel Bracho. O’Higgins used his influence to have Grace and Marion Greenwood added to the group. The murals were completed by early 1936. In April 1936, shortly after the Greenwood sisters had returned to the U.S., the Washington Post reported that Diego Rivera had named them “the greatest living women mural painters.” [quoted in Oles] 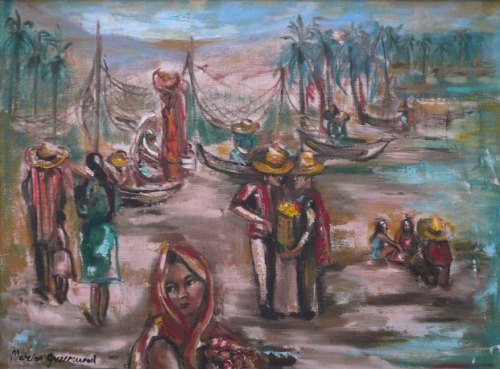 In the late 1930s, Greenwood taught fresco painting at Columbia University and completed murals for the social hall of the Westfield Acres Housing Project in Camden, New Jersey, and for the post office in Crossville, Tennessee. In 1940, she received a WPA commission to paint frescoes for the low-income Red Hook housing project in Brooklyn.

After 1940, Greenwood focused more on easel painting and printmaking than on frescos and murals. During the second world war she was one of only two women appointed as an artist war-correspondent. Her paintings, drawings and etchings of wounded and recovering soldiers are housed in the official archives of the U.S. War Department.

From 1944-46 Greenwood lived and worked in China. She continued to travel widely after her return to the U.S. Towards the end of the 1940s, Greenwood moved away from New York City and settled in Woodstock in upstate New York.

The context and details of her visit to Chapala in 1969 are unknown. Despite some water damage, her drawing entitled “Chapala Girl” dating from that visit is wonderfully evocative. 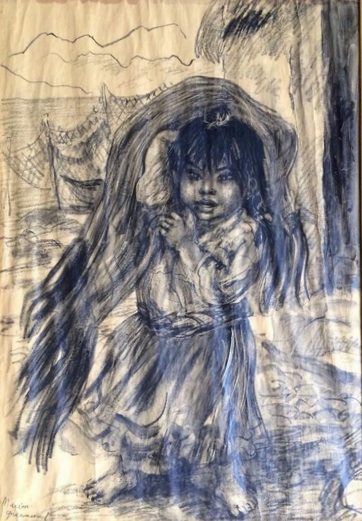 If anyone can fill in the details of Greenwood’s visit to Chapala, please get in touch! 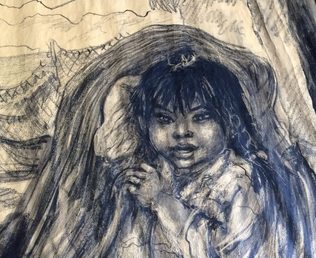 Greenwood won numerous awards for her art including the Lithography Prize from John Herron Art Institute, Lippincott Figure Prize at Pennsylvania Academy of Fine Arts, both the Altmann Figure Prize and the Lillian Cotton Award at the National Academy of Design, and The Grumbacher Prize.

Other artists and authors linked to both Lake Chapala and Woodstock, New York, include: