Indian yogi and guru Paramahansa Yogananda (1893-1952) introduced millions of westerners to the teachings of meditation and Kriya Yoga through his Self-Realization movement and his book, Autobiography of a Yogi (1946). The book was an inspiration for many people. For example, Steve Jobs (1955–2011), the co-founder of Apple, who first read the book as a teenager, re-read it during a trip to India, and then every year thereafter. The Self-Realization movement remains widely popular today. 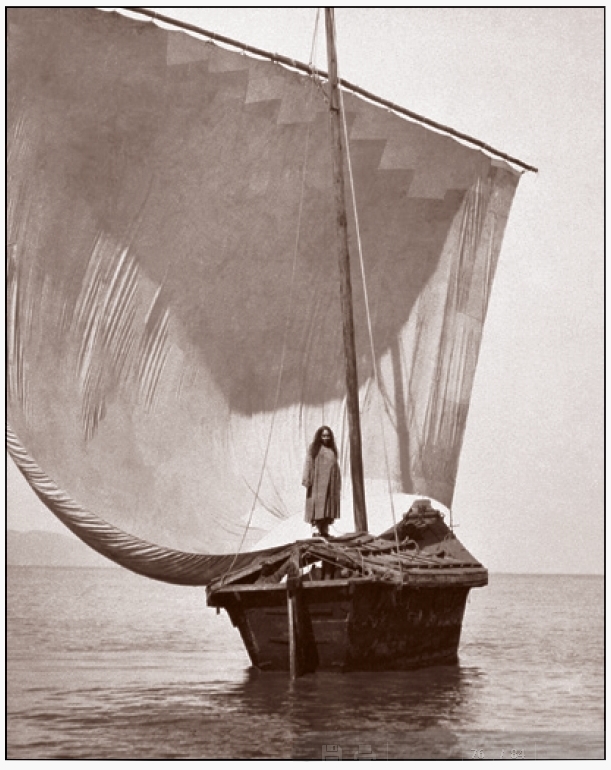 Paramahansa Yogananda visited Chapala in the summer of 1929. This striking image of him standing on a sail canoe at Lake Chapala has been regularly used since in the publicity materials of the Self-Realization Fellowship.

Mukunda Lal Ghoshin (Paramahansa Yogananda’s birth name) was born in Uttar Pradesh, India on 5 January 1893. He was educated at Serampore College, a constituent college of the University of Calcutta and in 1915, took formal vows into the monastic Swami Order and became ‘Swami Yogananda Giri’. He died shortly after giving a speech at the Biltmore Hotel in Los Angeles on 7 March 1952.

In 1920, he traveled to the U.S. aboard the ship City of Sparta, as India’s delegate to an International Congress of Religious Liberals convening in Boston. Later that year he founded the Self-Realization Fellowship (SRF), with the aim of more widely disseminating his teachings on India’s ancient practices and philosophy of Yoga and its tradition of meditation. In 1924 he gave speeches all across the U.S. and the following year established an international center (later the international headquarters) of SRF in Los Angeles, California. The Los Angeles center was run by Yogananda’s old school friend and co-worker, Swami Dhirananda.

Following the resignation of Dhirananda, Paramahansa Yogananda, stricken with remorse, needed a break, and on 23 May 1929, left the USA for a three month visit to Mexico. During the trip, he met Emilio Portes Gil, the Mexican president, gave lectures and wrote the chant: “Devotees may come, devotees may go, but I will be Thine always…” Paramahansa Yogananda, also visited Xochimilco, which he thought was one of the most beautiful spots he had ever seen: “As entries in a scenic beauty contest, I offer for first prize either the gorgeous view of Xochimilco in Mexico, where mountains, skies, and poplars reflect themselves in myriad lanes of water amidst the playful fish, or the jewel-like lakes of Kashmir.”

On May 23rd, 1929, Swami [Paramahansa] Yogananda sailed from New York on a visit to Mexico. While there he met the President of Mexico, and also opened a Yogoda Center in charge of General Caly Mayor, a staunch Yogoda student of Mexico City whom the Swami was very happy to meet.

On July 15th Swami Yogananda was presented by Mr. G. O. Forbes, First Secretary of the British Legation, to Mr. Portes Gil, the President of Mexico. During the interview, which lasted about one-half hour, the President mentioned his ambition to lift the Mexican people to a great spiritual ideal. Swami Yogananda, speaking of the President’s recent success in settling the religious situation in Mexico, pointed out that it was spiritual understanding and culture alone that could unite all nations and creeds into one helpful band of brothers, all traveling toward the same goal of perfection. At the conclusion of the very enjoyable talk, the Swami and President Gil were photographed by newspaper and motion picture photographers in front of the palace, and pictures and news stories appeared in several of the leading Mexican papers on the following days.

Two of the palace guards showed the Swami about the palace and its beautiful grounds. It is situated on a high hill overlooking the surrounding country. An atmosphere of Oriental grandeur, due to marble walls and gilded ceilings, mingles with a brisk democratic atmosphere which reminds one of America’s presidential White House.

The Swami greatly enjoyed the magnificent and varied scenery of Mexico, the beautiful Lake Chapala inspiring him to compose a poem in its honor. He made many friends in Mexico and took many moving pictures of the interesting people and places he saw, many of which reminded him of India and her sun-tanned sons and daughters. Immense interest in Yogoda was manifested. “The Mexican people are spiritually inclined,” Swami reported. “There is a great field here for Yogoda and the message of India.”

The poem composed by Paramahansa Yogananda during his visit to the lake is “Ode to Lake Chapala”:

O Chapala!
Like the flickering flame of Indo-skies,
Thy moods of limpid waters
Boisterously play with fitful gleaming storm,
Or rest on thy shining forehead
without a ripply wrinkle!
‘This then thy silver, shining mind,
Free of ruffling causes,
A transparent mirror—
Reflects just noble images
Of the green-dressed young and old hills,
Like tableaux of drilling soldiers
Standing hand in hand, with dwarf and tall heads,
Crowned with sliver skies or fleecy clouds.
I beheld the starry damsels
Beautifying their twinkling faces
In the mirror of thy waters.
How I watched in the flickering hall of lightning
Thy furious fight with the gunning clouds.
Showering torrential bullets of spattering rain,
O! what wild cloud-churned skies
and bounding winds,
Rolling thunder peals,
bursting vapour embankments,
Have flooded thy territory of waters
And have lashed thy spirit
to rouse thy resting soldier-waves
To leap to furious fightings!
Then again, when truce is signed with storm gods
And warring fury of the skies,
I find a stray white sail
Charged with a vital breeze,
Racing to thy horizon’s hidden unknown shores.
Thy nocturnal silence,
Oft rocked to sleep
By the lullaby of thy gentle breakers,
Is rudely roused at dawn
By those busy silence-shattering, droning sounds
Of man-made, horrid watery ploughs
Which encroach upon
Thy private fields of silence,
O! Changing Chapala
—The gleaming lightning of my feeling’s skies!
I love thee as never before!
Here’s hill-ramparted lake—
Which can allay
The scenic-beauty thirst of yearning minds.
When comes such another? Where?
Alas, Chapala!
Thy beauty will be snatched
From my adoring skies
By cruel duties of exacting life,—
But they will fail to take away
Thy beauty enthroned in me as joy for e’er.
The stony arms of the palace by thy banks
Enclosed a tract of thy loved waters,
And ‘neath the lone, shady tree,
Standing on the spot ‘tween two sheets of water,
Oft I sat with those unforgettable hours—
When I beheld the Infinite
Emerge from pale unanswering walls of blue—
And unite my soul with thee,
Mounts, skies, and me!