Born in Milwaukee in November 1919, she was only 19 when she met her future husband William “Bill” Scheuber. She studied at the University of Wisconsin, and the couple married on 30 May 1942. Even at that time, a contemporary newspaper described her as “Wisconsin’s foremost woman painter”. Fein was one of a group of six painters known as the Wisconsin group who exhibited together and remained life-long friends. The others were Gertrude Abercrombie (1909-1977), Marshall Glasier (1902-1988), Dudley Huppler (1917-1988), Karl Priebe (1914-1976) and John Wilde (b. 1919). 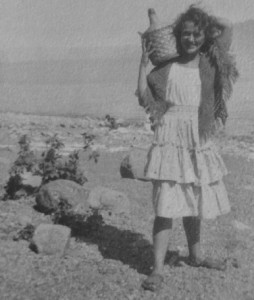 While her husband was away on military service (as an Air Force cryptographer), she moved to Mexico in 1943 to recuperate from pneumonia. Initially, she visited her mother in Mexico City, but a casual encounter with a former high school classmate, Charmin Schlossman Levy, led to her traveling to Ajijic on the shores of Lake Chapala, where she lived and painted until 1946. Interviewed by the press more than sixty years later in Mexico City, Fein said that ever since that time, “I have loved Mexico and could cry on my return because I have the dust of Mexico on my heart”.

Her first show in Mexico was a group show at the Villa Montecarlo in Chapala in 1944. Other artists exhibiting in that show included Jaime López Bermúdez, Otto Butterlin, Ernesto Butterlin (“Lin”), Ann Medalie and Betty Binkley.

During the years she lived in Ajijic, Fein was busy completing paintings for her first solo exhibition at the Perls Galleries in New York City in 1946. A sample of her works from this time can be seen at Work in Mexico, 1943-47, which includes images titled “Muchacha de Ajijic” (below) and “Insects that inhabit my studio in Ajijic.” 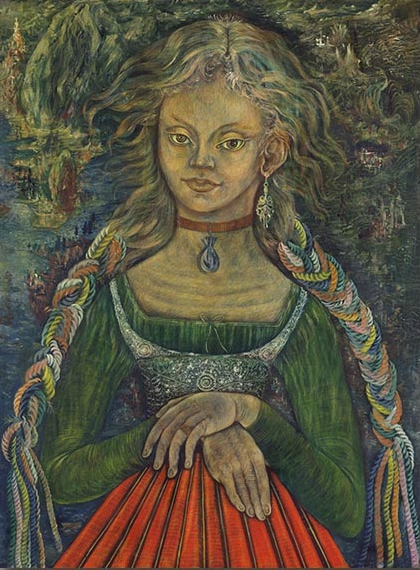 She recalls on her website that, while in Ajijic,

she helped rebuild the adobe house in which she had her studio, taught English to a few young people eager to go to work in Mexico City, and started an embroidered blouse industry for women who owned the two foot-pedaled sewing machines in the village. In exchange for exotic insects brought to her by the children for her own drawings, she provided paper, pencils and crayons and noted thoughtfully how spontaneously the children drew, and their meticulous observation, dexterity, humor and enjoyment.” (Elsewhere, she is said to have also worked with a local women’s cooperative and helped on a friend’s farm during her time in Ajijic.)

She knew, and worked with, Neill James (who first arrived in Ajijic in September 1943), and this quote means that Fein was already helping local children develop their artistic talents almost a decade before James began a more formal program for children’s art in 1954.

In Dust on my Heart (1946), Neill James describes how Sylvia Fein “worked out some original designs” for embroidery as her role in one of the first village enterprises that allowed local women and girls to earn some money at home during their spare time. In addition, Fein played a key role in marketing the embroidered blouses in Mexico City.

Victor Serge, a Russian exile in Mexico, visited Ajijic over the Christmas-New Year period, 1944-45, and describes Fein in his diaries as having an:

irregular face where the forehead is too big, anxious and frustrated: her husband has been a long time in the war somewhere in the islands of the Pacific. She’s afraid of bad news and is hard hit by being on her own. She has the first-rate drawing of a diligent beginner, gladly turns over the pages of old albums, knows water-color, treasures Persian miniatures. As she’s dominated by frustration and anxiety, the canvases of a very mournful young girl result, naive, delicate and falsely naive, with remarkable symbolics of cats, birds, eyes.”

After Ajijic, and when her husband returned from the war, the couple lived for a time in Mexico City before driving, with Fein’s paintings, back to the U.S.. Before leaving Mexico, Fein did some exporting of silver jewelry, seeking out fine pieces and shipping them to an uncle who had a shop in Milwaukee. Fein dealt with many of the most famous silversmiths of Taxco.

At the U.S. border crossing on their return, the customs agent asked about all the paintings. After a brief discussion, it was apparently agreed that they were “antiques” and therefore exempt from duty!

Fein’s first solo exhibition was a great success. Reviewing the show for The New Yorker, Robert M. Coates wrote that,  “The Perls has a first one-man exhibition by a young Milwaukee artist named Sylvia Fein… whose work somehow manages to suggest the German Gothic and the Oriental at practically the same moment… her technique—firm, precise, and clear—is always authoritative.”

Later that year, her work was included in the 1946–47 Whitney Annual exhibition, alongside paintings by Max Ernst, Roberto Matta, and Jackson Pollock.

When WW2 ended and her husband Bill Scheuber returned from military service, they made their home in the San Francisco Bay area where Fein completed her MFA at the University of California, Berkeley, in 1951. Writing in the San Francisco Chronicle in 1962, Alfred Frankenstein extolled the virtues of Fein’s art: “Clarity, finesse, and perfection of draftsmanship are other virtues Sylvia Fein possesses. She is one of the most highly individual painters in the Bay Region and one of the most accomplished”.

After their daughter Heidi was born, Fein kept a meticulous record of her early drawings and artwork, which prompted her to write two landmark books about children’s art: Heidi’s Horse (California: Exelrod Press, 1976) and First Drawings: Genesis of Visual Thinking (Exelrod, 1992). The books have had a major influence on child development specialists interested in the creative process of young children.

Like Carrington, Kahlo and other great women artists of the past century, Fein is a solitary genius who has created a rich world on her own terms.”                  – Michael Duncan, Art in America, April 2008

In the past decade or so, Fein has finally received the recognition due her as one of America’s foremost surrealists. A series of major shows have placed her art alongside that of other great painters such as Leonora Carrington and Frida Kahlo, Louise Bourgeois, Lee Miller and Dorothea Tanning:

Fein’s work also features in volume 2 of Emerging from the Shadows: A Survey of Women Artists Working in California, 1860-1960, a four volume work by Maurine St. Gaudens (Schiffer Publishing, 2015).

My sincere thanks to Sylvia Fein for her warm hospitality during a visit to her home and studio in February 2015, and for being kind enough to review a draft of this post.