Christian Reid was the nom de plume chosen by Frances Christine Fisher (later Tiernan). As a woman writing in a man’s world, presumably she felt that her pen name would enable her to better compete with her male counterparts. Fisher was very familiar with the Lake Chapala area and must have visited it, or stayed there, in the late nineteenth century, though the precise details remain unclear. In 1890, Fisher published A Cast for Fortune: A Story of Mexican Life, which had the hacienda and village of Atequiza as its setting. (At that time, Atequiza was the railway station closest to the town of Chapala.) 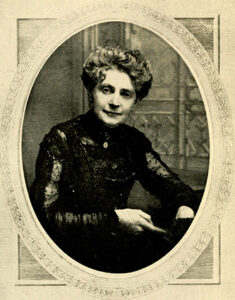 In the slightly later travel story, The Land of The Sun: On Lake Chapala (1893), the protagonists agree that Mexico’s constant sunshine makes any discussion of the weather irrelevant, unlike north of the border. They are on their way from Guadalajara to visit “Don Rafael’s hacienda.” After taking the train to Atequiza, they ride horses to Chapala. The horseback ride, about four leagues in distance, takes longer than they expected since, as one of the characters aptly comments, “Leagues in this country are very elastic.”

Once in Chapala, they comment favorably on the beauty of the surroundings, the thermal water with medicinal qualities, and the local hostelry with its equipal furniture.

Fisher (1846-1920) was born in Salisbury, North Carolina. Her father invested in mining ventures and was the president of the North Carolina Railroad. The family was left penniless in the aftermath of the Civil War, so she began writing for money at quite an early age.

Among early pieces was “Regret”, a poem written “in memory of Julian Fairfax, MA, University of Virginia”, in 1861, when Fisher was about 15 years old. Her first book was Valerie Aylmer, published in 1870, when she was 23. She was a prolific writer, especially of very popular and financially successful light romances. In all, she had almost fifty novels and travel narratives published. In several cases, the books used material that had been previously serialized in magazines. Her best-known book is The Land of the Sky (1876) set in the now homonymous western part of North Carolina. Many believe the region took its popular name from the book.

In 1887, Fisher married James M. Tiernan, a widower who had interests in silver mines in Mexico. In letters to her, Tiernan describes meeting President Díaz, and is critical of Americans who displayed prejudice against Mexicans. He also related his problems involving an embezzling official and a recalcitrant British engineer. It is unclear if the couple actually lived together in Mexico for any extended period, but she certainly must have visited frequently. The couple traveled widely, and Fisher used the knowledge she gained to write novels set not only in Mexico, but also in New York, the West Indies and Europe.

After her husband’s death in 1898, Fisher turned to the church. She continued to write, in her hometown of Salisbury, until her own death in 1920. Frances Fisher (aka Christian Reid) was inducted into the North Carolina Literary Hall of Fame in October 2002.

[This is a lightly edited excerpt from chapter 38 of my Lake Chapala through the ages: an anthology of travellers’ tales.]

Source of image: opposite page 327 of Jethro Rumple’s A history of Rowan County, North Carolina (1916).