Owen Wallace Gillpatrick (1862-1925) was an American author and playwright who spent a short time in the Chapala area in about 1899, several years prior to publishing his book The Man who likes Mexico (1911). The book includes an atmospheric photo of moonlight shining on Lake Chapala. 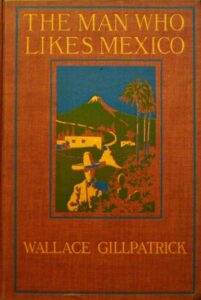 The title of his book, The Man who likes Mexico, is the byline he used as a correspondent for the Mexican Herald. His planned one year trip to Mexico in 1898 eventually became six years in length. The book describes his journeys and experiences during his first two years in Mexico. He approached the country with a refreshingly positive attitude, summed up by the following quote from the foreword:

“Americans who visit Mexico will not fail to discover much that is likeable; and it seems only just to remark first on what is likeable, deferring adverse comment until a careful observation of life and conditions shall have rendered intelligent criticism possible.”

Gillpatrick was born in New Hampshire, but lived almost all his life in California. He had always yearned to visit Mexico:

Reared in California, where the romance of early Mexican days still lingers, and where the prodigality of nature and of life are in keeping with Mexican tradition, I ardently dreamed of this Spanish American southland”.

He was a spontaneous and adventurous traveler. Unlike many of his contemporaries, Gillpatrick positively preferred the areas away from the railroads. He stayed for a month in Guadalajara, before continuing on to Chapala. Gillpatrick’s enthusiasm for Mexico never waned. He closed his book by writing that, “Two ties united my heart to Mexico—first, love of friends; last and always, her mountains”.

His recollections of Chapala include a description of the Hotel Arzapalo, Chapala’s first major hotel, designed for Ignacio Arzapalo Palacios, a Spaniard who had come to Chapala seeking the curative properties of Chapala’s thermal waters and then fallen in love with its natural beauty and favorable climate. The hotel had opened in 1898.

That the manager of the Hotel Arzapalo was a man of taste, I knew when I saw the hotel, with its clambering rose-vines, its well-kept gardens and the little pier running out into the lake, with comfortable benches at either side. When he assigned me to a room, with a view of mountain and lake combined, I was doubly sure. The memories of my ride, together with a bountiful dinner, made me content to loaf the rest of the afternoon; but towards evening I started in search of the warm mineral baths, for which the place is noted. A gentleman who knows Chapala, had said to me, “Don’t go to the fine-looking bath-house with the ‘Baño’ sign; follow the same street till you come to some old buildings and then ask for the tanque.” So I walked by the fine-looking baños and in an old orange orchard, I found the great swimming tank. It must be sixty feet long by twenty wide, and the bottom slopes so that at one end it is over a man’s head. It is surrounded by a high wall and the palms and orange trees grow close up to it. The water is a trifle more than blood-warm, so that you feel an almost imperceptible accession of warmth in stepping into it. It is the kind of a bath that you leave reluctantly and then feel tempted to return to.

The Hotel Arzapalo has some fifty rooms, a large sala and dining-room overlooking the lake, and is provided with a bar and billiard table. The cooking is excellent and the bread is all made in the house. The hotel is situated in what is, beyond doubt, one of the loveliest and most healthful spots in all Mexico.“

Gillpatrick’s prose was very popular in his native country during his lifetime. He was a fluent Spanish speaker, and his translation “with much taste and skill” of Catalan writer Àngel Guimerà’s play Marta of the Lowlands, was performed on Broadway in 1903. He also translated Guimerà’s La Pecadora (Putnam, 1917).

This post is based on the biography that appears in my Lake Chapala Through the Ages: an anthology of travellers’ tales (2008).

Other authors featured in Lake Chapala Through The Ages include: