The artist John Langley Howard (1902-1999), known to friends as “Lang”, is considered one of the finest painters of his time in the San Francisco Bay are.

In 1934, he was one of the group of artists commissioned as part of the New Deal Public Works Art Project to paint murals in the Coit Tower on Telegraph Hill overlooking the city. Howard chose to depict his Marxist-inspired view of industrial society. While this was the only mural he ever painted, it became not only his most viewed work, but is also considered to be “one of the finest examples of social idealism in San Francisco art”. 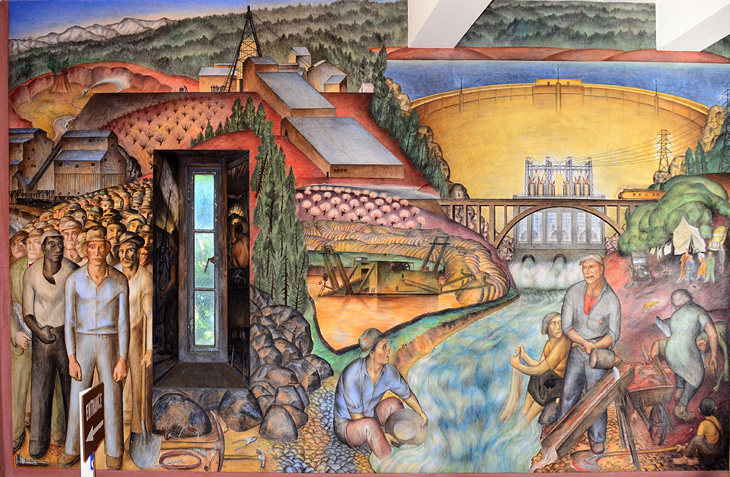 Howard is one of several San Francisco artists with links to Ajijic. Allan Temko, author of an obituary of Howard on the SFGate website, writes that,

“Mr. Howard was a wanderer. He lived in more than 20 different places in the course of his long career, ranging from several periods in San Francisco, north and south of the Bay Area from Calistoga to Monterey, from Santa Fe, N.M., to Brownsville, Texas, from Ajijic in Mexico to Greece, as well as New York and London.”

While the duration and circumstances of his visit to Ajijic in 1951 are unclear, it was in the company of his second wife, the sculptor Blanche Phillips Howard (1908-1979), and marked a turning point in his career. “Mountain Air” (below) may have been painted at about this time. 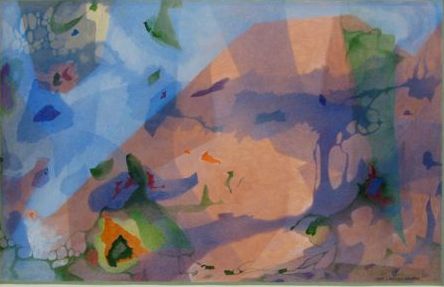 “Lang” was born into a family of architects and artists in Montclair, New Jersey, on 5 February 1902. He was only an infant when his family moved to California, where his father was the architect of the campus of the University of California at Berkeley, and many other major buildings in the state.

John Langley Howard studied engineering at Berkeley (1920-23) before taking art classes at the Art Students’ League in New York (1923-24) and in Paris, France. In 1924, he left art school and married Adeline Day. He held his first solo exhibition, at The Modern Gallery, San Francisco, in 1927.

During the second world war, Howard worked as a ship drafter and air raid warden. He divorced Adeline in 1949 and the following year was teaching at the California School of Fine Arts. He married Blanche Phillips, a sculptor, in 1951 and moved to Mexico that same year. 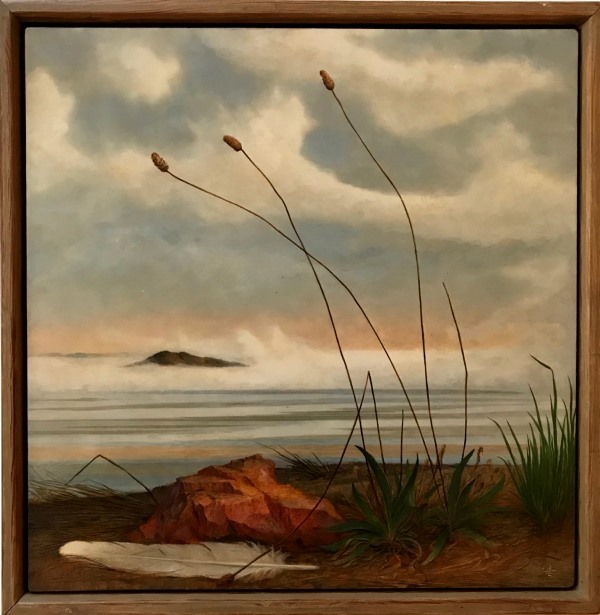 His acrylic on board “Trinity” was shown in the Whitney Museum of American Art’s Annual of Contemporary American Painting in New York, open to the public from November 1951 to January 1952.

Prior to Mexico, Howard had experimented with Abstract Expressionism. Back in San Francisco by 1952, Howard’s art took on a much more eco-activist stance with a painting called The Rape of the Earth. The three panels of The Rape of the Earth “successively portray the stormy formation of the planet amid lightning flashes, its spoliation by machines in a tremendous scene of technocratic destruction, and, finally, the ravaged land returning to a natural state, still befouled by mechanical wreckage, but eventually to be healed and cleansed.” [Temko, 1999]

Howard’s massive triptych – “In the Beginning, “Rape of the Land” and “Back to Nature” – dating from 1976, is in the collection of the San Francisco General Hospital.

From 1953 to 1965, Howard illustrated numerous covers for Scientific American magazine, and also taught for a year at the Pratt Institute Art School in Brooklyn, New York. Howard lived in Europe during the late 1960s, returning to California in 1970. John Langley Howard passed away in 1999 at his home in San Francisco at the age of 97.

“I think of painting as poetry and I think of myself as a representational poet. I want to describe my subject minutely, but I also way to describe my emotional response to it… what I’m doing is making a self-portrait in a peculiar kind of way.” – John Langley Howard

Examples of Howard’s art, which won numerous awards, are in the collections of the California Palace of the Legion of Honor; the City of San Francisco; the IBM Building, New York; The Oakland Museum; The Phillips Collection, Washington D.C.; the San Francisco Museum of Modern Art; Security Pacific National Bank Headquarters, Los Angeles; the Springfield Museum of Fine Arts; and the University of Utah.

He had at least two two-person shows with his wife, Blanche Phillips Howard. The first (“Capricorn Asunder”) was held at the San Francisco Art Commission Gallery in 1973 and the second at the Bank of America Center in San Francisco in 1975.

My thanks to Michael Agostino (see his valuable comments on Blanche Phillips Howard) for prompting me to update this profile in July 2019.

The U.S.-born John Langley Howard described in this post should not be confused with the U.K.-born violinist, John Langley. The latter was a long-time resident of Ajijic and was photographed for Leonard McCombe’s 1957 Life magazine article about the village.