Richard D. Yip is included in the large group of artists associated with Lake Chapala on the strength of a painting entitled “Facade, Chapala, Mexico” which he exhibited in the All Southern California Art Exhibit in Long Beach, California in 1952. Sadly, beyond that, I have managed to find nothing more relating to his visit or visits to Lake Chapala.

Yip was born in Canton, China, in 1919. He emigrated from China to the U.S. in 1931. After completing high school, he studied at the California College of Arts and Crafts in Oakland. After serving as a gunner and radioman on a B-24 in the U.S. Air Force during the second world war, he returned to California and settled in Stockton, where he studied at the College (later University) of the Pacific in Stockton for his B.A. and at the University of California at Berkeley for his Masters degree. Yip was the first Chinese person to receive American citizenship because of military service. 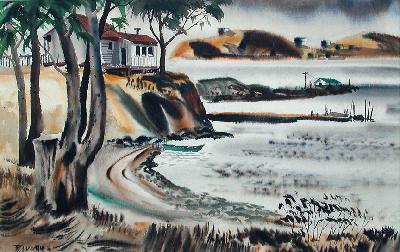 By early 1947, Yip was living and working with fellow artist Craig Sharp on a yacht, the Lassen, in Sausalito harbor. Yip was already working in watercolors and held solo shows which attracted positive reviews. Later that year he left California to return to China to see his family and study art there. He visited various cities and amassed a body of work that he brought back to California with him in 1948.

While in China, Yip married a girl named Lae. The couple’s first child, daughter Pak Mui (“White Blossom”), named after a boat Yip had admired in Sausalito harbor, was born aboard ship en route back to San Francisco. Perhaps not surprisingly, U.S. immigration officials initially denied entry to the mother, who spoke no English, and daughter, but they were eventually allowed to remain and were able to join Yip and other members of his family in Stockton.

Yip hoped to show some of his work at the state fair in Sacramento in September 1948.

Presumably, it is at this stage of his career that Yip spent some time in Mexico, including a visit to Chapala where he painted “Facade, Chapala, Mexico”.

Yip taught art at the University of the Pacific in Stockton for many years and led many plein air painting workshops. By 1955, the promotional material for one of these workshops describes Yip, the instructor, as a “California watercolorist who has studied, painted and exhibited throughout the United States, Mexico, Europe and China.”

Yip maintained links to Sausalito and spent many summers painting in Marin, where he was a member of, and gave talks to, the Marin Society of Artists. He was also a long-time member of the California Water Color Society.

By 1961, the build-up to a talk by Yip on “some of the trends in contemporary art” says that Yip “has conducted painting classes at the College of the Pacific, Stockton College, the annual Monterery Peninsula Painting Tours, Death Valley Tours, Marin County, San Francisco, Santa Barbara, the East Bay, Phoenix, Arizona, Sacramento, San Jose and other places for the past 12 years.” By that time, his work had appeared in several national publications, and his watercolors had won various national and international awards. Yip was also elected a Life Member of the International Institute of Arts and Letters of Switzerland.

It appears that Yip retired from college teaching at about this time, though he continued to lead painting tours, including at least one to Mexico in 1963. (In January 1964, another Stockton artist, Marjorie Tanner, gave a talk to Lodi Art Club about the tour, led by Richard Yip, she had undertaken in Mexico.

Richard Yip died in 1981. Several works by Yip have been sold at auction in recent years, including ‘The Red Church’ sold at Bonhams, Los Angeles, in 2011.