Hazel Emma Wilson, a prolific author of children’s books, visited Lake Chapala in 1971, “doing research for a Mexican book”. At that point in her career she had already written 19 books. Unfortunately, it remains maddeningly unclear whether or not any book based on her Mexican research was ever published!

Wilson (née Hutchins) was born in Portland, Maine, on 8 April 1897 (some sources claim 1898). She earned her AB from Bates College in Lewiston, Maine, in 1919 and a B.S. in Library Science from Simmons College, Boston, Massachusetts, in 1920. She worked as a librarian in various educational institutions: Portland High School, Maine; Kirksville State Teacher’s College, Missouri; Bradford Academy, Massachusetts; the American Library in Paris, France (1926-1928); and was supervisor of school libraries in Denver, Colorado. 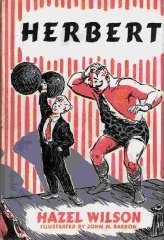 Hazel Wilson is best known for her series of stories about Herbert, a 10-year-old whose antics were based on the real-life experiences of her son and his friends.

Wilson was also a lecturer at George Washington University, Washington, D.C. (1956-1957) and taught at one time at Georgetown University. For some years, she wrote monthly reviews for the now defunct Washington Evening Star newspaper. She was a founder of the Children’s Book Guild of Washington and a member of the American Newspaper Women’s Club and Women in Communication.

Among other honors, Wilson won the Ohioan Award for Island Summer (1949); the Boys’ Clubs of America Junior Book Award for Thad Owen (1950); the Edison Award for His Indian Brother (1955); and the 1955 New York Herald Tribune Spring Book Festival Honor Award for Herbert.