Travel writer and novelist David Dodge lived in Ajijic for several  months in 1966. He had traveled throughout the country and subsequently published a popular motoring guide covering all of Mexico. The book, Fly Down, Drive Mexico: A Practical Motorist’s Handbook For Travel South of the Border, was published by Macmillan in 1968, together with a Special Guide to the XIX Olympic Games that were held in October of that year in Mexico City. 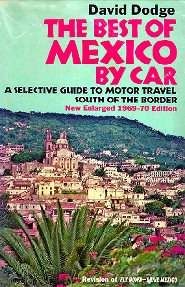 The book was revised and reissued the following year (1969) as The Best of Mexico by Car: a Selective Guide to Motor Travel South of the Border, from which these extracts are taken:

Except for the pescado blanco and pleasant scenery, there is no real reason to make the drive [from Guadalajara to Chapala] unless you have leisure for it and want to see how the other half lives. No tourist “musts” lie along the road to Chapala, and not much in the way of maybes. The lake’s north shore, like Cuernavaca, is simply an American retirement colony; sprawled out more, less expensive to live in and with fewer swimming pools, otherwise much the same.” . . .

“If you do make Lake Chapala an overnight side trip, taking the time to loiter along the way, a good place to spend a night is Chapala town. It’s the first community you come to on the lake shore, a pretty place remindful of Riva on Lake Garda, relatively un-Pepsi-Coked except for two enormous eye-popping billboards that challenge each other for maximum offensiveness to the eye as you come back to dock from what would otherwise be a very pleasant boat ride on the water. Chapala town is as popular with tapatíos, Guadalajarans, on weekend family outings as it is with semipermanent gringo residents enjoying a year-round climate even better than Guadalajara’s own, so best call ahead to make a reservation on Saturdays, Sundays and holidays.

The first motel you come to conspicuously by the side of the road where the road begins to wind down out of the hills toward the lake shore is both phoneless and unrecommendable. No problem here. Best place, a good one, to spend the night in Chapala town is the Hotel Nido, tel. 38, $7. It’s right on the (quiet) main stem a few steps from the lake. The Nido, essentially an American-plan hotel but not one liable to insist of American plan except possibly on weekends, serves one of the best inexpensive cubiertos in the whole countryside, with pescado blanco a specialty, and even better pescado blanco a la carta. Its chief rival in this specialized field is the Restaurant El Mirador, with a pleasant view overlooking the water. Incidentally, you may hear much of Chapala as a fishing resort. It isn’t one, for you. The lake does contain catfish, and a species of sunfish that can be taken by hook and line, with patience. The pez blanco, which becomes pescado blanco after it has been caught, is taken in nets, by professionals.

At Chapala town, Highway 35 becomes 94 and bears westward, right, along the lake shore, ann attractive drive. Two or three miles on, an almost exclusively gringo-built and gringo-occupied, brand-new retirement center, Chula Vista, offers the Motel Chula Vista, tel. 69 (Chapala), $12. This, cocktail bar and all, is as familiarly American as the rest of its community. It offers, besides the usual pool, a tennis court, golf privileges at a course next door and a coffeeshop serving hamburgers, pies, ice cream, sandwiches, all the familiar short orders. Many Americans would prefer Chula Vista to the Hotel Nido for these reasons.

Two or three miles beyond Chula Vista, 94 touches the fringes of Ajijic, a four-century old stone-and-adobe fishing village that is just beginning to suffer the onslaughts of Pepsi-Coke. Luck, relative isolation by bad roads until a few years ago and the determination of a fair-sized American colony to preserve its native Mexican ambiente have permitted the village to survive so far, much as San Miguel de Allende and Taxco have survived under the protection of Federal law and Guanajuato because of one man’s dictatorial determination. Ajijic has no motels, but a very attractive hotel on the lake shore, Posada Ajijic, tel. 25, $12. (The Monte Carlo, another good lakeshore stop-off on the road out of Chapala town, has still to open for business at this writing.) The Posada welcomes a drop-in trade for lunch or dinner at the family board, which serves a regular house cubierto. The only place in town serving a la carta meals (good) that are consistently acceptable by gringo standards is the Villa del Lago, no phone yet, write A.P. 81, Ajijic, Jal., $7, a nice small hotel in the middle of town one street west of the little central plaza. Other places on the lake or in the village offer mainly housekeeping accommodations.

Ten or eleven miles beyond Ajijic, 94 runs through Jocotepec, another fishing-village-turned-retirement-colony….