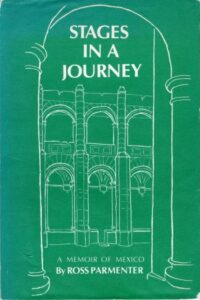 One of these books, Stages in a Journey (1983), includes accounts of two trips from Chapala to Ajijic – the first by car, the second by boat – made on two consecutive days in March 1946.

The author is traveling with Miss Thyrza Cohen (“T”), a spirited, retired school teacher who owned “Aggie”, their vehicle.

They meet up with Miss Nadeyne Montgomery (aka The General), who lived in Guadalajara; Mrs Kay Beyer, who lived in Chapala; and two tourists: Mrs. Lola Kirkland and her traveling companion, Mary Alice Naden.

The following extracts come from chapter 3 of Stages in a Journey.

“We had arrived in Guadalajara ready to spend a week with Nadeyne. We had never heard of Chapala, but we were willing to take her word that it was worth visiting, especially when we learned it was on a lake.” (82)

[After a day in Chapala] We drove out past the villas of the wealthier residents and found the smooth gravel ended at the outskirts of the town. The road proved even worse than I anticipated. It was dirt all the way and in very poor repair. To minimize the jolts it was necessary to go so slowly that most of the time I had to drive in second gear.

The road paralleled the shore of the lake. There were fields on either side and the mountains rose on our right. Actually, it was very pretty, with the picturesqueness being heightened by the cattle grazing in the fields and by the peasant people we passed, some riding donkeys, some herding goats, others carrying baskets. But, Lord, the going was bumpy! Trying to find the least broken surfaces occupied most of my attention.

As we rounded the first mountain headland, where the hills came close, I saw that a flood-stream, in racing down the slopes to reach the lake, had cut a ravine across the dirt tracks that comprised the road. The gully was narrow, but it was a good four feet deep and it was bridged only by two thick planks which were set a car’s width apart. As we crept over the planks, I thought, with a shudder, of the danger if one had to come back over them at night when it was hard to see.

After jolting along for about four miles we came to a pretty village called San Antonio. The road took several jogs to get through it and at the far end the General asked us to stop. She had some business to transact at a friend’s house. We offered to wait, but she announced she would walk the rest of the way. She needed the exercise. Mrs. Beyer would show us where to go, so we would not get lost. Once in Ajijic we were to visit the authoress, Neill James. We were to wait there and she would join us later.

As we resumed our way over the rutted washboard, I could see why the General preferred to walk. From here on the road had the appearance of a country lane, for it was shaded by gnarled trees that resembled mimosas. And besides being cooler and lovelier for walking, it was, if possible, even rougher for riding. Once in Ajijic the bumps came like bullets from a machine gun. The streets were cobbled. (85)

There was a resplendent purple and gold sunset. Sometimes unusual lighting effects can illumine a scene in an odd way, opening its whole significance, as it were. But this sunset did not have this effect on me. Principally, I saw it as a reminder of how late it was. I even resented the vividness. It seemed too flagrantly showy to be beautiful, and it heightened my sense of not belonging to Mexico. (90)

How could anyone ever feel at home in a land of such overpowering and excessive color? I asked myself. And as the question presented itself I felt as if all the alien features of the country—the heat, the tropical vegetation, the primitiveness, the throbbing colors— had gathered themselves together to oppress my northern spirit. (90) 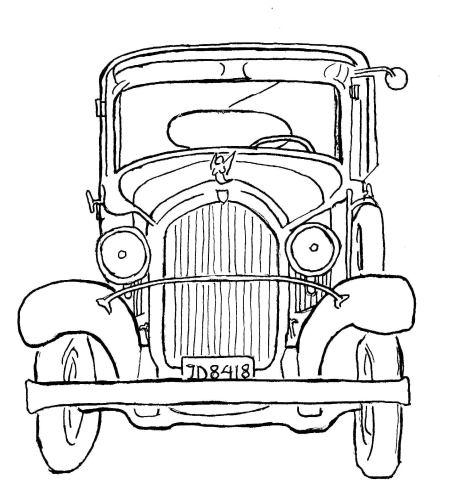 We were only a little way beyond Ajijic when I had to turn on the lights to see the ruts of the awful road. At first I doubted if the bulbs were burning, but as the dusk deepened I could see they were making a faint orange impression on the air in front of them. The glow dimmed and brightened according to our speed. I saw the generator was operating a bit, for when the motor turned faster the lights shone brighter. The trouble was that the road was so bad I had to go very slowly. It meant we had very little light. (91)
– – –
The intervening town of San Antonio, where the General had stopped on business on the way out, proved the greatest hazard. Not being electrified, there were no street lights and one turn looked very much like another. But we got safely through the dark village. [and eventually safely back to Chapala]. (91)

The illustration in this post is by Ross Parmenter.