One of these book, Stages in a Journey (1983), includes accounts of two trips from Chapala to Ajijic – the first by car, the second by boat – made on two consecutive days in March 1946.

The author is traveling with Miss Thyrza Cohen (“T”), a spirited, retired school teacher who owned “Aggie”, their vehicle. They meet up with Miss Nadeyne Montgomery (aka The General), who lived in Guadalajara; Mrs Kay Beyer, who lived in Chapala; and two tourists: Mrs. Lola Kirkland and her traveling companion, Mary Alice Naden.

Ross Parmenter describes Ajijic and its church in 1946 in chapter 3 of Stages in a Journey:

At Ajijic the boatman brought us alongside the pier.
– – –

After getting the hat, Mary Alice and I took the time to do what had been impossible the day before. We looked around the town. We noticed that nearly all the low houses had corrugated tile roofs. Because of the wide, overhanging eaves, the roofs seemed to slope towards each other as if they wanted to meet over the narrow, cobbled streets. Most of the houses were whitewashed, but some were cream-colored and others showed the brown adobes of which they were built. The uncoated walls harmonized with the dirt roads, for the adobes were made of the same earth.

Occasionally we saw sprays of magenta bougainvillea toppling over expanses of flat, high walls. At one corner we saw fishing nets tacked for mending to the side of a house. Looking up the steeply sloping cross street, we saw high hills flanking the upper side of the town. Looking down, we got a glimpse of the lake, a silver-gray line drawn at the end of a vista of walls and sharply projecting eaves.

At the centre of the village, as we expected, we found a plaza with a church at one corner. The plaza was like an unfinished sketch. There was no sign of a municipal palace, but otherwise it had the usual elements. But nothing was complete. The bandstand, for instance, had railing posts, but no railing; and there was no sign of a roof. There were tiled walks radiating from the stand, but the more important outer walks were still unpaved. There were cement lamp posts, but they were used only as supports for electric cord that was strung between them with a few exposed bulbs hanging at irregular intervals. And the fountain had a circular stone basin all right, but its source of water, instead of being an ornamental centrepiece, was an ordinary kitchen faucet on one side.

Most of the iron benches were broken and the flower beds were unkempt and forlorn, Indeed, the whole square would have been dusty and dreary had it not been for the trees. The jacarandas were a mass of blue blossoms. And among the pale green foliage of the flat-topped flamboyants were so many red-orange flowers that I could see why they are called “flame trees.”

The church was at the back of a walled garden. Its steeple rose in four diminishing stories and was so elegant in effect that it suggested the work of a Georgian admirer of Sir Christopher Wren. 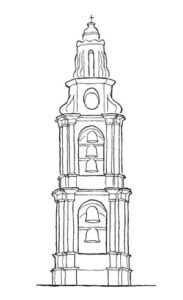 An arched gateway led into the garden. When we passed through its wrought iron gates we found the fine tower had raised false hopes. The rest of the church did not live up to it. It was small and crude, with all of the rough facade being whitewashed except the old doorway. In the gray stones of its lintel, cut in rough letters, was the information that the church had been built in 1749. By this time I had seen so many earlier dates that I felt blasé about anything so recent. After all, it was a mere twenty-six years before the American Revolution.

The low-ceilinged interior was not impressive, but it gave evidence of care. Defining the vestibule, was a new entrance screen of highly varnished wood and the floor of blue and white checked tile was as clean as a Dutch kitchen. The wooden reredos behind the altar looked as if it had been planned for a loftier church and then been cut off at the top to fit this one. It was painted white. A big picture of the Virgin of Guadalupe hung on the side wall. Another Virgin was a large, fresh-faced doll that resembled Deanna Durbin. With her white dress, blue cape and silver crown, she was decked out as if she were a princess in a Christmas pantomime.

In striking opposition was the church’s most interesting object: a primitive Jesus realistically nailed to a fanciful cross, which had rays suggesting a sunburst. The Saviour’s brightly gilded crown of thorns and his red velvet waist wrapper contrasted grotesquely with his gray, blood-streaked body.

As we turned to leave, a bell began ringing outside. It had a regular sound pattern: one long clang and two short ones. We also heard some pleasantly tinkling bells. And rounding the vestibule screen we almost caught our breath at what we saw. Framed by the trees of the garden and the high round arch of the gateway was a beautiful view of the cobbled street, and making his way up that street was a man in the white cotton clothes of a native driving three tan oxen, who were ringing the bells at their throats with the rhythmic bobbing of their heads.

The louder bell, that was ringing dash, dot, dot, was one of those in the steeple of the church. A boy was tolling it by pulling on an outside rope that reached the ground.” (pp 96-98)