Esther Henderson and her husband, Chuck Abbott, spent six weeks in Mexico taking photographs for Arizona Highways magazine in the early 1940s. They were major contributors to the magazine for decades.

They published at least three photographs related to Lake Chapala in Arizona Highways. The first two were black and white images in the September 1942 issue of a farming family’s home and a landscape view of adjoining peasant smallholdings on the lakeshore. This color Kodachrome photograph, taken from almost exactly the same vantage point as that landscape view, was included in the October 1945 issue of Arizona Highways. 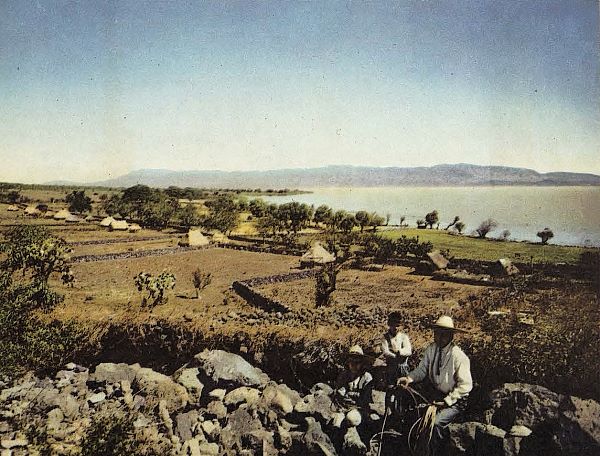 The original caption for the following photo (from the September 1942 issue of Arizona Highways) read “A farmer’s house and his family on the shores of Lake Chapala, near Guadalajara. These farming folk are unusually industrious and self-reliant.” 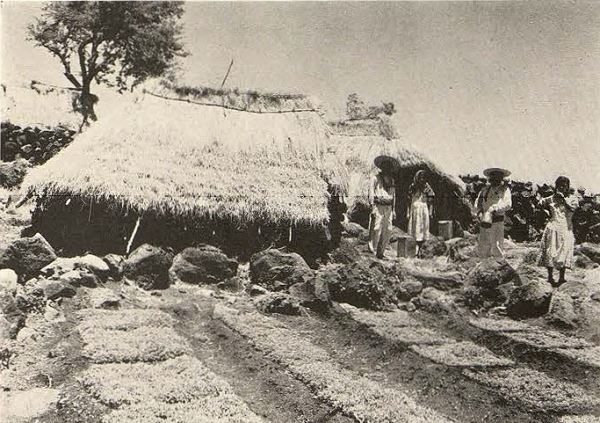 The precise location of these smallholdings is undetermined, but appears to be somewhere on the southern shore of the lake, perhaps close to San Luis Soyatlán or Tuxcueca.

Charles “Chuck” Abbott was born in Michigan in 1894 and died in Santa Cruz, California in 1973. After high school, he joined his brother in Hawaii to work on a pineapple plantation. During the first world war, he served with the 23rd Army Engineers in Europe, where “he photographed the war-torn landscape.” On his return to the U.S., he established Chas. H. Abbott Photography business in New York to market his photographs. With the proceeds, he opened (with a German partner) a shop on Fifth Avenue selling exotic birds. Abbot married the daughter of a wealthy rug merchant and the couple moved to Florida to run a dance hall and casino, “Abbot’s Joint.” After that business was destroyed in a hurricane in 1928, his wife returned to New York.

Abbott, however, moved to California and ran a coffee shop in Carmel before relocating to Palm Springs, where he became known as the “Cowboy Host,” arranging breakfast rides and events for the wealthy patrons at the Desert Inn. He first met his second wife, Esther, when he was hired by the Tucson Sunshine Club as the “Cowboy Photographer” to take photos of all the various important celebrities visiting Tucson.

Esther Henderson was born in Illinois on 24 July 1911 and died on 22 August 2008. She was a professional dancer in New York City for several years before taking up photography. After studying at the New York Institute of Photography, she moved to Tucson, Arizona, in 1935 to start her photography career. Esther specialized in landscape photography and was a frequent contributor to Arizona Highways from the 1930s onward.

Chuck and Esther met in early 1941. Esther was the chairwoman of a group of local Tucson photographers who were outraged that the Sunshine Club had chosen Chuck Abbott, an outsider, as their “Cowboy Photographer.” Chuck tried to visit her in an effort to smooth the ruffled feathers. After first refusing to meet him, Esther later agreed to join him for a drink, which led to a picnic, and then a joint camera shoot. They were married within months.

The couple, who had two sons, traveled and worked regularly together to capture images and write copy for several travel publications. During the 1950s, Esther published “Way Out West”, a weekly photographic feature column every Saturday in the Tucson Citizen.

Esther and Chuck opened The Photocenter photography studio and gallery in Tucson, where they also later established Color Classics, the first color laboratory in Arizona.

The January 1968 issue of Arizona Highways was a special edition devoted to three decades of Esther’s photography.

The couple moved to Santa Cruz, California, in 1963 where they were actively involved in community affairs. They restored a number of houses in the town and spearheaded an initiative to improve the downtown area; the name Abbott Square honors their achievements. They also replaced the town’s lighthouse as a memorial to their son, Mark, who drowned while bodysurfing at the age of 18.

Chuck died in 1973. Esther continued to live in the family home in Santa Cruz until her death in 2003.

The University of Santa Cruz is the custodian of an extensive archive of the couple’s color transparencies.