Edgar Mitchell Ellinger junior was in his mid-forties in 1953 when he wrote about “the small, captivating town of Ajijic” for the Arizona Republic under the title, “Mexican Town Offers Peaceful Way of Life.” 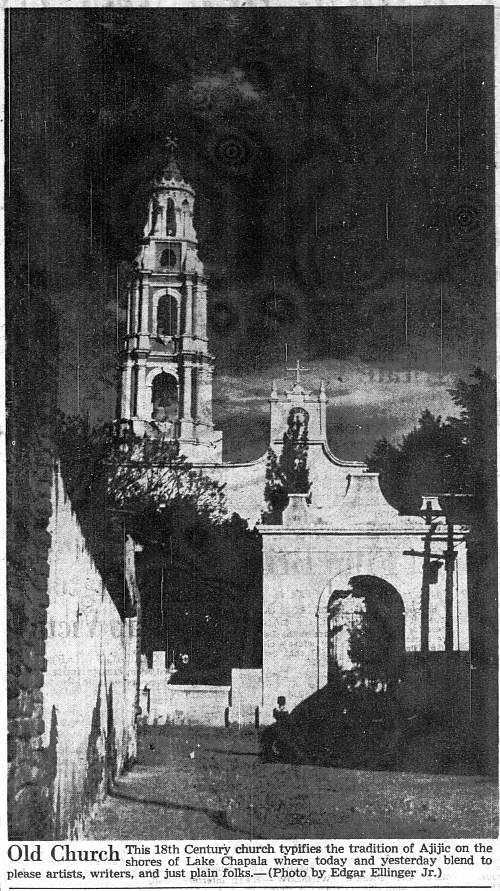 Ellinger was born in New York on Christmas Day 1906. After attending Horace Mann School for Boys, he became a Wall Street securities analyst and financial executive. His (first) wife was the NBC vocal star Sarah Schermerhorn, better known by her performing name of Sally Singer. The couple married at Ellinger’s home in New York City on 27 March 1936.

In 1945, Ellinger was the executive vice-president of the Jefferson-Travis Corporation, which specialized in radio equipment and the continuous sound recording field.

To quote The New York Times, Ellinger “left Wall Street in 1947 to live in Sedona, Arizona, where he raised quarter-horses and became a writer and photographer.” Ellinger published articles in several publications, including Desert Magazine in Palm Desert, California.

Here are two excerpts from his piece about Ajijic for the Arizona Republic:

Today, this small fishing village throbs with the interesting and varied activities of a growing international population—attracted by a satisfying climate, inexpensive living, and an atmosphere of “mañana.” The “urgency of life,” so well known to Americans, is strangely lacking.
Artists, writers, musicians, and just “plain folks” have settled in this picturesque haven. Accommodations are available in the two hotels in addition to about 40 renovated old houses owned or rented by non-Mexican.

After commenting on the diverse foreign population, which included “an attractive red-haired ex-violinist and his beautiful wife” and “a world-traveled and world-weary Englishman named H. B. Thompson,” Ellinger explained that:

Ajijic has achieved its popularity in part through the efforts of two Englishmen who… wrote a widely-read book called “Village in the Sun,” which extols the naive simplicity of this harmonious settlement. Neill James has also written extensively on the same subject and occupies a delightful home which encloses wide patios outlined by myriads of brilliant flowers. She grows Japanese silkworms and weaves the silk into blouses beautifully hand-embroidered by a handful of native women who work on the premises.”

Ellinger died at his home in Mountain View, California, on 10 June 1974.