Peirce visited Ajijic in the mid-1940s, and may have been there more than once since he is known to have made several trips to Mexico. His visit to Ajijic, believed to be in 1945, was recorded by American author Neill James who had settled in the village a year or two previously: “Gary Pierce [sic], director of an art school in New Mexico, visited our village and executed many delicate water colors and engravings.” (Modern Mexico, October 1945). Despite the misspelling, and the fact that the art school that he directed was actually in Arizona, there is absolutely no doubt that James was writing about Gerry Peirce. Sadly, the whereabouts of his paintings and engravings of Ajijic remain a mystery.

Peirce graduated from the Cleveland School of Art (now the Cleveland Institute of Art) in 1925, and also studied at the Art Student’s League in New York City. He married his childhood sweetheart, Priscilla, and the couple moved to Nova Scotia, Canada, where Peirce began to execute etchings and engravings. 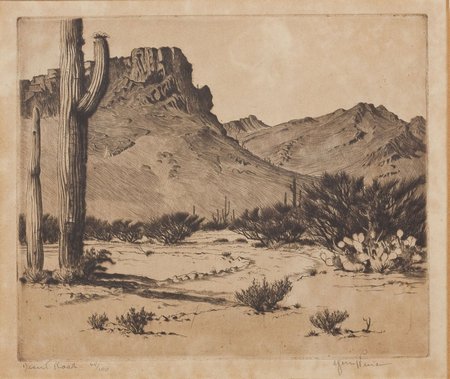 After Canada, Peirce and his wife lived and worked in New Orleans. His time in New Orleans is particularly noteworthy because he was one of the co-organizers and charter members of the New Orleans Art League in December 1929. The other organizers were Harry Armstrong Nolan (1891-1929), Gideon Townsend Stanton (1885-1964), William Weeks Hall (1895-1958) and Henry Costello. By coincidence, Gideon Townsend Stanton also had close family links to Chapala: his maternal grandparents had a holiday home there for several years at the very end of the nineteenth century.

This early dry point, The Cat, is one of several dry points gifted by Peirce to the Cleveland Museum of Art in 1934: 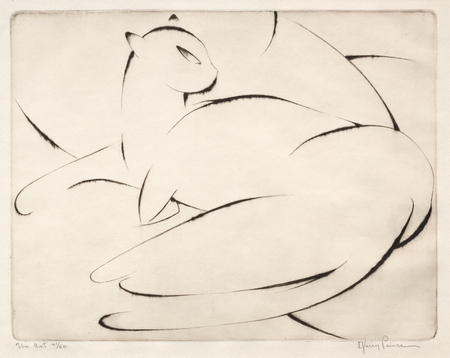 In the early 1930s, during the Great Depression, Peirce and his wife lived in various places, including Florida, Cuba, Washington D.C., New York City and Philadelphia, where Peirce established a commercial art studio, producing cards for Cartier and Tiffany & Co. Later, the Peirces moved to Colorado and began to spend winters in Arizona, eventually making their home in Tucson, Arizona, in the mid-1930s. Peirce opened an atelier (“The Print Room”) in Tucson in 1934 and continued to produce wonderful dry point engravings. He also turned his hand to books.

Writing as “Percival Stutters”, Peirce wrote and illustrated at least two children’s books: How Percival Caught the Tiger (1936) and How Percival Caught the Python (1937), both published by Holiday House. Peirce also drew the black and white illustrations for Plants of Sun and Sand: The Desert Growth of Arizona, which had short texts by Stanford Stevens and was published by The Print Room, Tucson, in 1939. The original edition of that particular book is highly distinctive since it had a plywood cover. 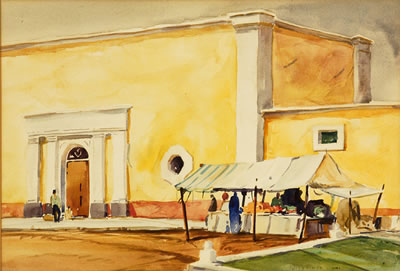 At about this time, a sketching trip with Stevens turned out to have a momentous impact on Peirce’s subsequent art career. As Peirce later recalled:

One day I was looking at a scene Stan was doing and wondered why he had picked out that particular spot. Why paint that I asked? His reply, “Because it has such a beautiful color,” jolted me right out of everything I’d been doing for the past twelve years. I realized that I was no longer seeing a landscape with its colors, but in terms of the black and white of etchings. I saw that even my etchings were becoming flat no longer suggesting the color of things.”

Though he never stopped producing his exquisite engravings, after Peirce picked up a brush and watercolors, he never looked back. He soon gained recognition as one of the country’s leading watercolorists. He was also a fine teacher and his studio-classroom attracted students from all across the country. In 1947, the Tucson Watercolor Guild was organized to provide a permanent studio and classroom space for Peirce to continue his work. His teaching career was curtailed by a heart attach in 1967.

Peirce’s timeless portrayals of the Arizona desert and his tireless efforts to help others see the beauty he saw helped shape Tucson into the artistic center of Arizona.

From Arizona, Peirce made several sorties into Mexico. The wonderful collection of prints, published by The Print Room in 1969 as The drawings of Mexico, included images of San Miguel de Allende; Marfil and La Valenciana (both in Guanajuato); and of Tzintzuntzan (Michoacán). By this time, Peirce was no longer completing watercolors en plein air but was making quick pencil sketches or rapid watercolor impressions in the field to serve as memory aids for his final paintings done back in the studio.

A contemporary reviewer described the collection as “a portfolio of reproductions of pencil drawings made by Gerry Peirce in Mexico, a country he visits frequently and understands. This understanding and his affection for the country and its people are reflected in every sensitive line and shading of these outstanding drawings.” 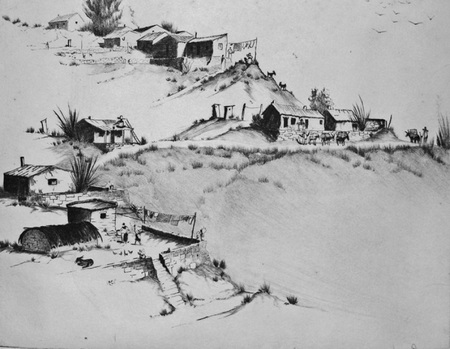 Peirce was a frequent exhibitor wherever he lived and a member of the Society of American Etchers, the Chicago Society of Etchers, and the California Print Makers. Note that the oft-repeated claim in contemporary newspaper accounts that Peirce had been awarded an honorary doctorate in art by “St. Andrews University College in London” can not be substantiated since there is no record of any institution of that name, though it is possible that Peirce was granted an honorary degree by St. Andrew’s University in Scotland.

In 1980, more than a decade after Peirce’s death, a retrospective exhibition of his watercolors and etchings was held at the Kay Bonfoey Studio and Gallery in Tucson. Bonfoey, one of his former students, had purchased the adobe-and-redwood building that had formerly been Peirce’s studio and classroom space after his death to run her own gallery, and to continue the legacy of the Tucson Watercolor Guild. Interviewed at the time, Bonfoey said that Peirce was:

… a unique human being. He wasn’t just a teacher of art, he was a philosopher, a thinker. No two classes were ever the same, the explorations were always different, always … well, awesome. He constantly looked into the relationship between nature and art. Nature was the base for everything he saw in his paintings, in other people’s work, in life around him.”

A fitting tribute to one of America’s great twentieth-century watercolorists. 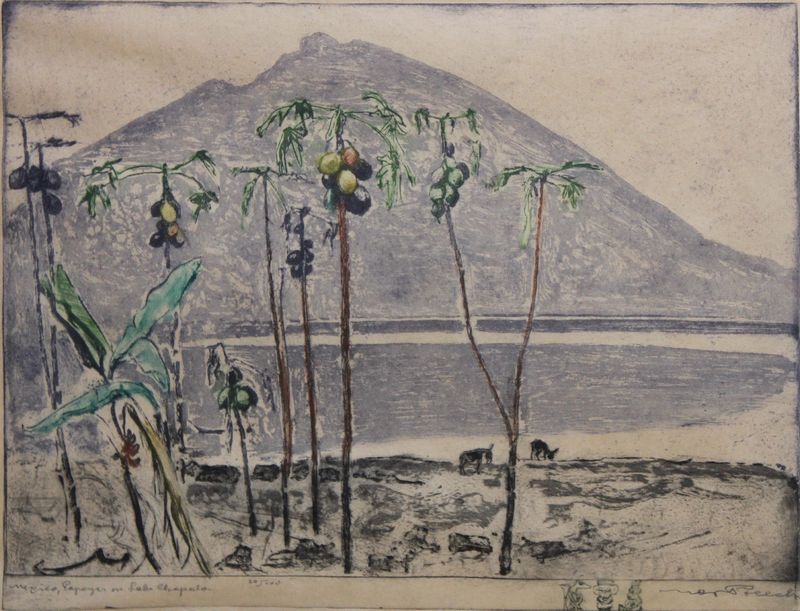 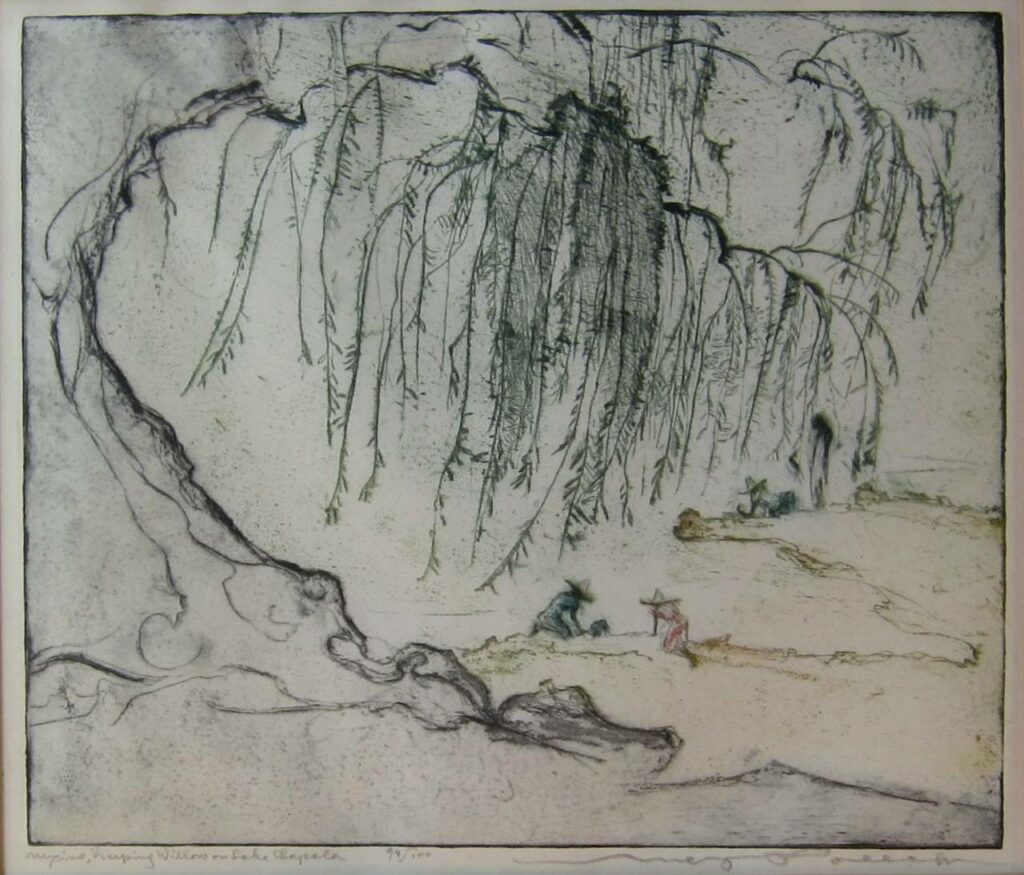