Lorraine Vivian Hansberry was an African American playwright, artist and author of political speeches and essays. She studied art in Ajijic at Lake Chapala in the summer of 1949, mid-way through her studies at the University of Wisconsin, where she took classes in art, literature, drama and stage design. 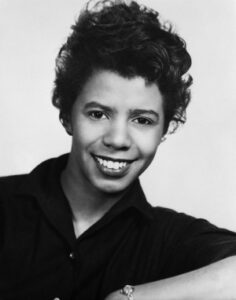 Her father, Carl Hansberry, was a prominent Chicago realtor who, in 1938, challenged the city’s racially segregated housing laws, by moving his family into a “restricted” area near the University of Chicago. The resulting violence, in which bricks and concrete slabs were thrown through their windows, prior to them losing their legal suit challenging the legality of restrictive covenants and being evicted from that home, subsequently inspired Lorraine Hansberry to write her best-known play, A Raisin in the Sun (1959).

A Raisin in the Sun was the first play written by an African American woman to be produced on Broadway. The 29-year-old author became the youngest American playwright to receive the New York Drama Critics Circle Award for Best Play over Tennessee Williams‘s Sweet Bird of Youth. The play was translated into 35 languages. A movie version of A Raisin in the Sun was released in 1961, starring Sidney Poitier, Claudia McNeil and Ruby Dee. The movie was nominated “Best Screenplay of the Year” by the Screen Writers Guild and won a special award at Cannes Film Festival. Raisin, a musical based on the play, opened in New York in 1973.

Lorraine Hansberry was only 15 years old in 1945, when her father, “in a final desperate act to escape racial oppression in the U.S.”, moved to a suburb of Mexico City. Carl Hansberry was making arrangements to relocate his family to Mexico when he died there the following year from a cerebral hemorrhage.

The following summer she studied art at Roosevelt University in Chicago before moving to New York City, where she took courses in jewelry-making, photography and short story writing at the New School for Social Research. While living in New York, she became actively involved in peace and freedom movements.

Hansberry wrote several other plays, including The Sign in Sidney Brustein’s Window, which played for 101 performances on Broadway and closed the night she died.

Hansberry’s life and achievements inspired her close friend Nina Simone to write the song “To Be Young, Gifted and Black” (lyrics by Weldon Irvine), first recorded in 1969.

At Hansberry’s funeral, a tribute message from Martin Luther King Jr. praised “her commitment of spirit” and “her profound grasp of the deep social issues confronting the world today.”