American sculptor and painter Mym Tuma had her studio in San Pedro Tesistan, near Jocotepec, the town at the western end of Lake Chapala, from 1968 to 1973. Tuma, formerly known as Marilynn Thuma, has become an important figure in the contemporary American art world.

Tuma was born 23 September 1940 in Berwyn, Illinois. She studied at Northwestern University in Evanston, at Stanford University in California and undertook graduate work at New York University.

After university, she moved to Mexico, setting up a second floor plein air studio in San Pedro Tesistan to experiment with three dimensional works. This was a formative period in her artistic development, fostered by the support, moral and financial, of her mentor Georgia O’Keeffe (1887–1986), the “Mother of American modernism”. 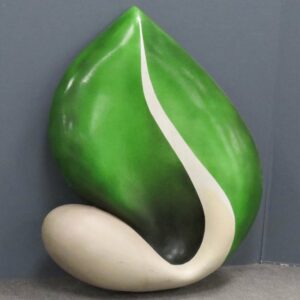 Tuma first contacted O’Keeffe, fifty years her senior, in 1964 when she was studying in Irving Sandler’s modern art seminar for postgraduates at New York University. Despite the age difference, O’Keeffe and Tuma discovered they shared several common interests. O’Keeffe, then living on a ranch in Abiquiu, New Mexico, bought one of Tuma’s early works, and the two women corresponded for a decade. (The story of this correspondence is told by Tuma at OkeeffeAndMe.com).

The studio in San Pedro Tesistan had neither electricity nor running water. In her “Feminist Artist Statement” on a Brooklyn Museum webpage, Tuma recalls her time there:

“In the high plateau of southern Mexico, overlooking Lake Chapala, I painted in remote San Pedro Tesistan. In that village were only two vehicles: a red Firebird, and a paneled truck, until I arrived in 1966 in a Volkswagen bus. I rented a studio for $8 per month and worked with an assistant, 17-yr. old Cruz Robledo who I taught to drive. She suppressed her giggles learning how to control the VW on cobblestone streets, rumbling down a string of plastered, cracked and chipped adobes. Women like Cruz worked at home, sewing and cooking, but she had a streak of independence. She did not let people, or men subordinate her. She grew more confident, while working on my sculptures, sanding fiberglass to smooth curves. She helped me prepare my paintings. Her mother still scrubbed clothes on rocks at the edge of Lake Chapala, her Aunt Deodata partnered with another woman near my studio. Cruz respected my work. I tutored her to become as independent as I myself.

In the Sixties, women lost children and we heard church bells tolling for them in my 2nd floor plein aire studio. Cruz crossed herself and whispered sad news. We’d rest to watch the peaceful blue haze over the distant mountains and breathe. We shared ideas sanding my shaped sculptured paintings, far from the conflict in Vietnam. I felt militant about my work, in that time and remote place, to quote T.S. Eliot, “to construct something upon which to rejoice.” Convinced that one day it would bolster women’s power and equality in the U.S.

Before I left, we strung a rooster pinata from the church to my studio, and invited mothers with babes, and small children. They filled the floor eating cake and cream. Women nursed babes in rebozos around us. Cruz decided to become a midwife to help reduce suffering she saw among her sisters. As difficult as living in Mexico was, its vibrant colors, forms of energy, and simple life inspired my organic principles. For centuries, rituals of planting and harvesting maize surrounded my studio. However my materials/methods were innovative and contemporary to the 20th century and beyond.

I showed an elderly American Modernist painter the forms I had so much theory about—Georgia O’Keeffe. We debated issues and theories. I created 17 sculptured paintings, traveling 3,500 miles to the U.S. and back, over five times to garner O’Keeffe’s fiscal mentorship.”

O’Keeffe’s letters to Tuma include many references to financial support. Perhaps the most poignant is the one dated 3 July 1968, shortly after Tuma has visited New Mexico:

“I am glad you came and were here a few days. Do not sell your car or part with your dog. I will send you the two thousand that you need to get your next three paintings done . . . . It may take ten days or two weeks. If I send it may I consider your black creation mine?”

The “black creation” was a fiberglass sculpture called Obsidian, which Tuma duly took north on her next trip to New Mexico.

After her time at Lake Chapala, in 1974, Tuma toured New South Wales and Western Australia, painting and sketching as she went, before establishing her studio on the East End of Long Island, New York. She is widely recognized for her work in the category of organic minimalism, which is influenced by oceanic and coastal forms, such as beach pebbles, sand, sprouting seeds, and spiraling shell forms.

Her “sculptured paintings” have been exhibited at many galleries, including Guild Hall (East Hampton), the Parrish Art Museum (Southampton village), and the Clayton-Liberatore Gallery (Bridgehampton), all in New York State. Tuma is a charter member of the National Museum of Women in the Arts, and lectured at the Brooklyn Museum in 1992.

Examples of Tuma’s sculptured paintings are in the permanent collections of several museums, including the Hirshhorn Museum and Sculpture Garden, in Washington, D.C., the Cantor Arts Center at Stanford, Palo Alto, as well as in the private collections of Henry Geldzahler, Tipper and Al Gore, and others.

Tuma has also written several art-related books, including The Sea, the Simplicity of the Sea, and Other Poems, (Come to Life Graphics, 1984) and Radiant Energy, Light In My Pastel Paintings (2005).

Mym Tuma is yet another of the many famous artists who have found inspiration while at Lake Chapala, where the light, lake, people and scenery combine to stimulate creativity.