Jack Vance was a successful mystery, fantasy and science fiction author who wrote more than a dozen books and also wrote TV screenplays.

He and his wife Norma spent several months in Mexico traveling with Frank Herbert (author of Dune) and his wife Beverly and their two young sons in the second half of 1953.

Vance had met the then less successful Herbert a year earlier in California, and the two had become friends and writing companions, sometimes working on joint projects. They decided to visit Mexico in search of new experiences and stimulation. The Vance-Herbert friendship was the start of one of the greatest literary bromances related to Lake Chapala.

Many aspects of the families’ joint trip to Mexico in the Vances’ new blue Jeep station wagon are endearingly told by Herbert’s elder son, Brian, in Dreamer of Dune: The Biography of Frank Herbert.

Selection of covers of books by Jack Vance

While the writers did cooperate on some “joint ventures” while in Chapala, they each also wrote short stories, hoping to sell some to magazines north of the border and thereby extend their stay in Mexico. 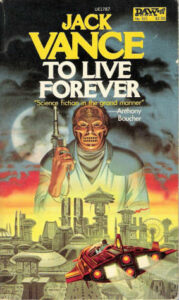 According to San Francisco book and art dealer Tim Underwood who edited a work about Vance, the origins of his futuristic novel To Live Forever (1956) date back to 1953 at Lake Chapala:

“One night Frank and Jack tossed around an idea for a novel and afterward flipped a coin to see who would write it. Jack won the toss and the book became To Live Forever.”

It should be noted that To Live Forever was Betty Ballantine’s choice for the title, not the author’s. Well received by critics, it was later renamed Clarges.

John Holbrook Vance was born in San Francisco on 28 August 1916 and died in Oakland on 26 May 2013. He wrote more than 60 books. In addition to work published under “Jack Vance”, he published 11 mystery stories as John Holbrook Vance and 3 as Ellery Queen as well as single titles using various different pen names, including Alan Wade, Peter Held, John van See and Jay Kavanse.

Vance, educated at the University of California Berkeley, held a variety of jobs prior to serving in the Merchant Marine and becoming an established writer.

2 Responses to “By toss of a coin in Chapala, Jack Vance won the opportunity to write an amazing novel”