Erik Homburger Erikson (1902-1994), who coined the term ‘identity crisis’, spent several weeks in Ajijic in 1957 while writing Young Man Luther: A Study in Psychoanalyses and History, published the following year. 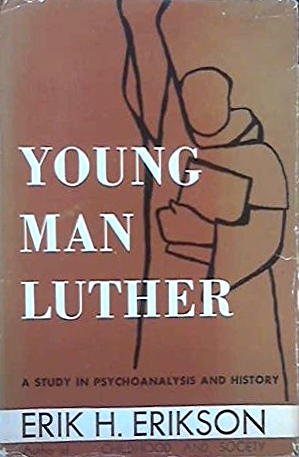 Erikson had been persuaded that Ajijic was a quiet place in which to write by Helen Kirtland and her husband Dr Larry Hartmus. After an exchange of letters, Erikson ended up renting the “cottage” on Calle Independencia belonging to the Sendis family, whose son, Gustavo, was a super talented painter and guitarist.

Erikson, born in Germany to Danish parents, had become a US citizen after moving across the Atlantic. He became world famous for his ideas on identity and his contributions to the field of psychoanalysis and human development. Among Erikson’s best-known books are Observations on the Yurok: Childhood and World Image (1943), Childhood and Society  (1950), Identity and the Life Cycle (1959), and the Pulitzer Prize-winning Gandhi’s Truth: On the Origins of Militant Nonviolence (1969).

There are two references to Ajijic in Young Man Luther, one right at the beginning and the other at the end. In the preface, Erikson acknowledges the help of Larry Hartmus, who “read some of the medieval Latin with me in Ajijic.” In the epilogue, this paragraph serves to sum up how Erikson saw the village, and the impossible-to-ignore influence of religion:

“I wrote this book in Mexico, on a mirador overlooking a fishing village on Lake Chapala. What remains of this village’s primeval inner order goes back to pre-Christian times. But at odd times, urgent church bells call the populace to remembrance. The church is now secular property, only lent to the Cura; and the priest’s garb is legally now a uniform to be worn only in church or when engaged in such business as bringing the host to the dying. Yet, at night, with defensive affront, the cross on the church tower is the only neon light in town. The vast majority of the priest’s customers are women, indulging themselves fervently in the veneration of the diminutive local Madonna statue, which, like those in other communities, is a small idol representing little-girlishness and pure motherhood, rather that the tragic parent of the Savior, who, in fact is little seen. The men for the most part look on, willing to let the women have their religion as part of women’s world, but themselves bound on secular activity. The young ones tend toward the not too distant city of Guadalajara, where the churches and cathedrals are increasingly matched in height and quiet splendor by apartment houses and business buildings.”  [266]