A chance find in a New Mexico newspaper mentions that artist Arthur Merrill and his wife visited Phoenix, Arizona, in February 1952, with plans to continue on to Lake Chapala. Arthur (“Art”) Joseph Merrill (1885-1973) took up art later than most, but forged a successful career in commercial art and as a watercolorist. 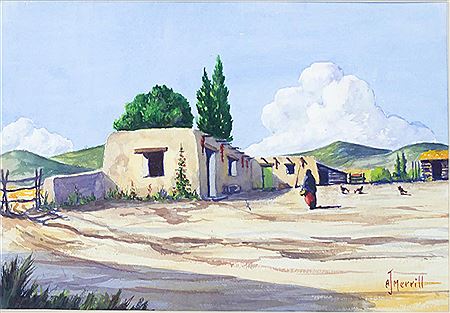 Merrill certainly completed watercolors of Guanajuato and other parts of Mexico. But, so far, no paintings have surfaced that are directly related to Lake Chapala.

Merrill was born in St. Louis, Missouri, on 11 April 1885, and graduated as a registered pharmacist, before deciding to study chemistry and geology. It was during a tour of European galleries and museums that he became determined to pursue art as a career. In 1911 he completed a Bachelor of Arts and Science degree at McGill University in Montreal, and took early color photographs for the French government during a Canadian geological survey. 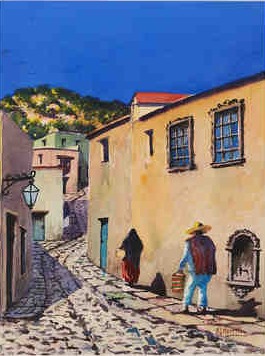 He took art classes with A. J. Musgrove of Winnipeg and Franz Johnston of Toronto (a member of the Group of Seven), and then headed for New York, where he studied at the Art Students League with Edmund Yaghjian. He also took private classes with Julius Delbos. Merrill established his studio in Greenwich Village and supplemented his art income by teaching at a private school.

He traveled widely over the next several years filling his notebooks with pencil sketches.

After 18 years in New York he moved to the American west, where he fell in love with the stunning rock formations that characterize the region, and with pueblo life. Merrill settled in Taos in 1946 and proceeded to open an art gallery and a studio while volunteering to give art classes in several local educational institutions. The Merrills were very active members of the Taos artist community.

Merrill, who held several solo shows of his paintings and lithographs in the US, Canada and Mexico, died in Taos on 21 April 1973.

If you have a work by Merrill that may be of Lake Chapala, please get in touch!