Watercolorist and art educator Ben Shute enjoyed extended trips in Mexico on several occasions and visited Ajijic in 1951. Two watercolors from that visit are now in the permanent collections of art institutions in the US.

Benjamin Edgar Shute was born in Altoona, Wisconsin on 13 July 1905, and studied at the Art Institute of Chicago, where his teachers included Allen Philbrick and George Oberteuffer from 1922-1928. He left Chicago in 1928 to take a six-week teaching job at the newly established High Museum School of Art (later Atlanta Art Institute) in Atlanta, Georgia. This temporary assignment was the start of an entire career teaching art in Atlanta, and he lived there for the rest of his life. Shute was dean-director of the High Museum from 1948-1950, and dean of the Atlanta Art Institute from 1950-52. The school established a scholarship in Shute’s honor in 1984.

Shute’s first trip to Mexico, partly funded by a Carnegie Travel grant, was in 1948. He and his first wife, Nell Choate (Jones) Shute (also a talented artist) held a joint exhibit afterwards at the High Museum, Atlanta. The show, featuring 45 or so watercolors,  was a great success. Doris Lockerman praised the artists for “retelling the tumultuous, violent and ancient story of Mexico through the vibrant strokes of their paintings made spontaneously and impulsively throughout a three-month vacation this Summer in Mexico.” Lockerman urged readers to visit the show and see for themselves how the two artists “have caught a headline history of current Mexico through which the thoughtful observer might begin to understand his neighbor south of the border.” The exhibit did not only show the bright side of Mexico: “The message of mismanagement and graft show in the muddy streets, cobblestone aqueducts, leaking roofs…”

The Shutes returned to Mexico for a month in 1950, driving to Guanajuato and Mexico City. The following year, Shute was on another Carnegie Travel grant when he and his wife visited Lake Chapala. Two watercolors from that visit are now in the Betty Plummer Woodruff Collection of the High Museum of Art in Atlanta. 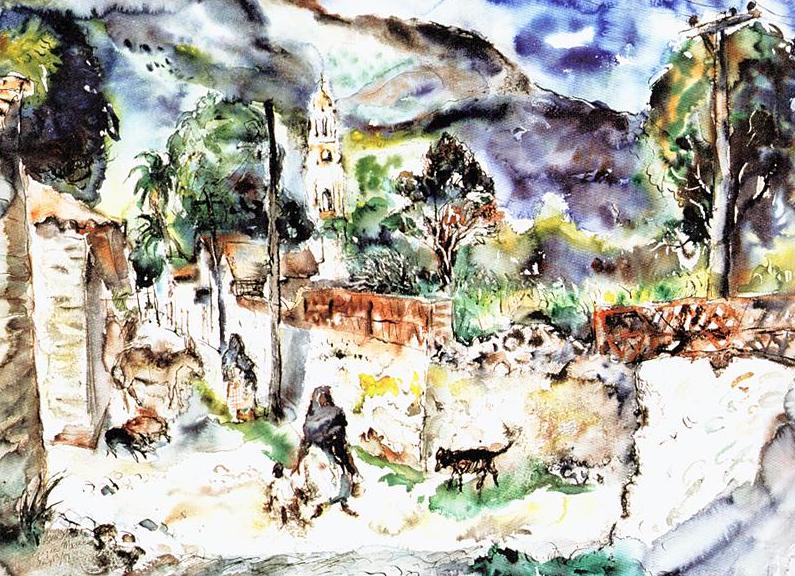 The first painting is a watercolor and ink on paper titled “Ajiji” (sic) and dated 13 August 1951. Set against the church bell tower and dark mountains, a woman and an infant stand next to a village wall, with a dog to the right of them. The museum website lists a second watercolor titled “View of Lake Chapala,” though sadly it is neither on display in the museum nor does the website have any image of it.

Shute is best known for his portraits, still lifes and evocative landscapes, often using casein and ink on paper. He delighted in painting plein air, and enjoyed having his creative and painting process watched by kids, animals and onlookers. His work was included in numerous group shows, the most noteworthy of which were the Museum of Modern Art in New York City, the Art Institute of Chicago, the Corcoran Gallery of Art in Washington, D.C., and the Brooklyn Museum in Brooklyn, New York.  He was a co-founder in 1945 of the Southeastern Annual Art Exhibition (a juried competition with over 2000 entries from nine southern states) which he chaired until 1961.

Shute, who was a member of the Salmagundi Club in New York, died in Atlanta on 15 July 1986. A retrospective exhibition of his works, organized by the Georgia Museum of Art in Athens, toured the state in 2002-2003.