Pema Chödrön, then known as Deirdre Blomfield-Brown lived with her husband, the poet and writer Jim Levy, for about a year in Ajijic from mid-1968 until May 1969. 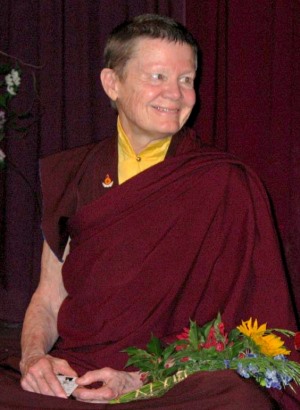 Chödrön was born (as Deirdre Blomfield-Brown) in New York City on 14 July 1936. After attending Miss Porter’s School in Farmington, Connecticut, she married at the age of 21, had two children, and moved to California, where she studied at the University of California at Berkeley. She graduated from that institution with a bachelor’s degree in English literature and a master’s in elementary education.

While at Berkeley, Chödrön met Jim Levy for the first time. She divorced her first husband and married Levy in 1966. Chödrön taught as an elementary school teacher for some years, first in California and later in New Mexico.

During her time in Ajijic, Chödrön taught English to Beverly Johnson‘s daughter Jill Maldonado who retains fond memories of her former tutor.

[I have so far been unable to find out anything else about Chödrön’s time in the village, so if you can add to this brief profile, please get in touch!]

From Ajijic, Blomfield-Brown and Levy returned to the U.S. to live in Taos, New Mexico. In a memoir entitled “¿Paradise Lost?” published in Hakod in 2009, Levy recalls their arrival in Taos:

Although Deirdre and I had BAs and teaching credentials from Berkeley, we didn’t mind living without indoor plumbing or a phone — in fact we thought it was glamorous. We used a two-seat outhouse and carried water in buckets from the Rio Hondo. Like our counterculture neighbors, we “returned” to the land — a purely hypothetical return because my family was Jewish from Los Angeles via Newark and Germany, and Deirdre’s was Catholic from New Jersey via Ireland. My father was a Freudian psychoanalyst and her father was middle management for Bendix Corporation.”

After Deirdre Blomfield-Brown’s marriage to Levy ended in 1971, she “explored different therapies and spiritual traditions” before stumbling across Buddhism. Deirdre subsequently changed her name to Pema Chödrön and became a novice Buddhist nun in 1974. She studied with Chögyam Trungpa Rinpoche in San Francisco and Lama Chime Rinpoche in London, England. Following years of study, she was ordained as a Tibetan Buddhist nun in Hong Kong in July 1981.

Chödrön was appointed by Trungpa Rinpoche as director of the Boulder Shambhala Center in Colorado for a few years before moving in 1984 to establish Gampo Abbey in Nova Scotia, Canada. She became the Abbey’s director in 1986 and remains in that position to this day.

In 2016 Chödrön was awarded the Global Bhikkhuni Award, presented by the Chinese Buddhist Bhikkhuni Association of Taiwan.