Peg Kittinger is one of the mystery artists associated with Lake Chapala. “Mrs L B (Peg) Kittinger” was an artist and art teacher who lived in Chapala for about nine years, from 1955 to 1964. Her address in Chapala in 1955 was Morelos #181, though she apparently later had a home in Chula Vista.

Hazel Peg (aka Peggy) Philips was born in Evansville, Indiana, on 23 September 1895. She married Louis Blacklock Kittinger (1892-1935) on 24 December 1919. The couple had two sons (George and Harold) and a daughter (Patricia Lou). On the marriage certificate her occupation is given as “decorator.” 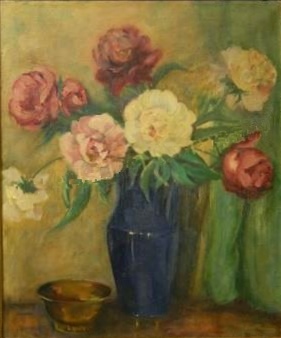 The family lived in Kansas City, Missouri, where Kittinger was a founder member of the Kansas City Society of Artists, which began in about 1921 and lasted into the 1940s. Kittinger was especially active in the Society after it moved its headquarters to 1718 Holly Street, a formerly abandoned hotel in about 1930. Several members of the Society, including Kittinger, had studios in the building. The Society’s great claim to fame was having Thomas Hart Benson as a member; the Society held the first solo exhibition of his work in 1934, by which time the artist was teaching in New York City.

In 1932, Kittinger held a solo show at the Kansas City Athletic Club, displaying 24 paintings, including landscapes of Colorado, still lifes and portraits of her houseman, cook and children. Her studio at that time was in the “Old Westport Studios.” The following year she held an exhibit of oils, mainly landscapes, at Women’s City Club in Kansas City, and in 1934 thirty of her paintings were exhibited in the Museum of her birthplace, Evansville. Kittinger had been almost totally deaf for several years by the time of this exhibition and an Evansville newspaper printed a poignant poem she had written entitled “Compensation” about her positive experiences after losing her hearing.

Her husband died in 1935. Kittinger then lived for some years in Albuquerque, New Mexico, where she taught art in Santa Fe and Alburquerque and spent summers painting in a Taos Canyon cabin. In 1952, Kittinger held a one person show of her paintings, weaving and metal work at the Botts Memorial Hall of the Albuquerque Public Library. The following year she participated in a joint show of recent work by female artists held at the Santa Fe Museum.

A year after moving to Chapala, Kittinger drove an artist friend, Mrs A Anway, back to the US when her friend decided to settle in Albuquerque.

If you have any artwork by Peg Kittinger, especially any related to Lake Chapala, please get in touch!

4 Responses to “Do you own a painting by Peg Kittinger?”