The great American poet and dramatist Thomas Lanier “Tennessee” Williams (26 March 1911 – 25 February 1983) had visited Mexico several times in the five or six years preceding 1945, but had never been to Lake Chapala. He spent the summer of 1945 in Cuernavaca and Chapala, and it proved to be a productive period in his writing career.

A year earlier, in 1944, his first major success – The Glass Menagerie – had catapulted Williams from obscurity to literary stardom, giving him a steady income. However, in 1945, Williams wanted to refocus on his writing and escape the publicity accompanying his success. He had also just had a cataract operation and wanted somewhere pleasant to recuperate.

While in Chapala, Tennessee Williams stayed at the home of poet Witter Bynner. Bynner’s home, now numbered as Francisco I. Madero #441. In Chapala, Williams wrote diligently for several hours every day, working not only on the new play provisionally called The Poker Night, but also on several poems and an essay entitled “A Playwright’s Statement“. In the words of Donald Spoto [1], Williams spent his time, “Strolling along the borders of Mexico’s largest inland body of water (over four hundred square miles), swimming, drinking rum-cocos with native boys….”

In his essay, “On a Streetcar Named Success” (1947), Williams recalls that “I settled for a while at Chapala, Mexico, to work on a play called The Poker Night, which later became A Streetcar Named Desire. It is only in his work that an artist can find reality and satisfaction, for the actual world is less intense than the world of his invention, and consequently his life, without recourse to violent disorder, does not seem very substantial. The right condition for him is that in which his work is not only convenient but unavoidable….“

How long was Tennessee Williams in Chapala?

It surprised me to discover that Williams spent less than two months in Chapala. He arrived in Chapala in July 1945 and left in mid-August of the same year. This is the only time he is known to have visited the area.

As Williams explains in his essay “The Catastrophe of Success”, “For me a convenient place to work is a remote place among strangers where there is good swimming. But life should require a certain minimal effort. You should not have too many people waiting on you, you should have to do most things for yourself. Hotel service is embarrassing. Maids, waiters, bellhops, porters and so forth are the most embarrassing…”

It appears to be largely coincidental that Tennessee Williams, who was a great admirer of British author D. H. Lawrence, happened to spend the summer of 1945 in the town where Lawrence had penned The Plumed Serpent twenty years earlier. 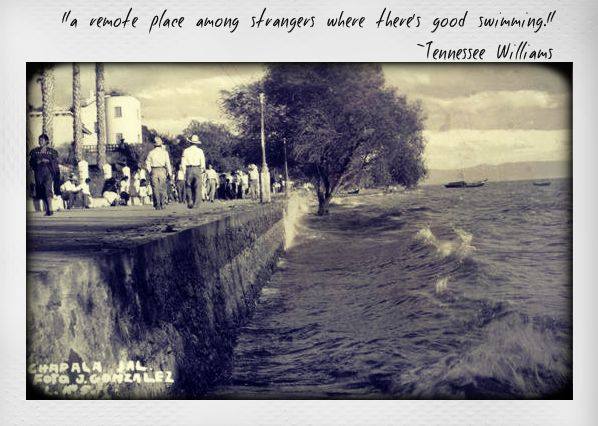 Does The Poker Night have any connection to the (Old) Posada Ajijic?

There is no evidence that The Poker Night has any connection to the (Old) Posada Ajijic. In a letter written 23 March 1945 (a week before The Glass Menagerie opened in New York, and several weeks before he left for Mexico), Williams wrote that he was “about 55 or 60 pages into the first draft of a play… At the moment, it has four different titles, “The Moth”, “The Poker Night”, “The Primary Colors” and “Blanche’s Chair in the Moon”.” [2] Clearly, therefore, he had started writing The Poker Night several weeks before traveling to Chapala.

Claims that Williams was inspired to write The Poker Night on account of regular poker sessions in the Posada Ajijic are equally spurious. In the event, according to Williams himself, the idea for the play did not come from poker playing, but from an image in his mind of a woman, sitting with folded hands near a moonlit window, who was waiting in vain for the arrival of her boyfriend.

The early history of the (Old) Posada Ajijic is murky, but it appears to have first operated as an inn sometime between 1938 and 1946. However, in those early years, it was certainly not a hive of activity, and did not become the social center of Ajijic until much later. It is possible  (though I know of no supporting evidence) that Tennessee Williams may have played poker on one or more occasions in the Posada Ajijic but, even if he did, it was clearly not a formative experience in terms of his writing.

As noted above, this play had numerous working titles including “The Moth”, “The Poker Night”, “The Primary Colors” and “Blanche’s Chair in the Moon”. The eventual title was not used by Williams until some time after he had left Chapala.

According to a webpage written by Bert Cardullo of the University of Michigan, who cites Nancy M. Tischler’s book Tennessee Williams: Rebellious Puritan (New York: Citadel Press 1961), Williams “had begun writing Streetcar in Chapala, Mexico (near Guadalajara) convinced that he was dying, that this would be his last play, and that therefore he should put his all into it. (Williams thought that the agonizing abdominal pains he had been experiencing were the result of lethal stomach cancer, but in fact they were caused by a ruptured appendix.)”

Spoto wrote that Tennessee Williams’ writing, in A Streetcar Named Desire (1947), “took on a fusion of sensuality and nostalgia and violence”, with the plot eventually centering on “a contest between the crude sensibilities of working-class poker players and the delicacies of two Southern women.” [1]

While spending the summer of 1945 in Chapala, Tennessee Williams also wrote several poems. “Recuerdo” (Spanish for “Memory”) is a poem in memory of his recently diseased grandmother and his interned sister Rose. Williams also reworked a poem previously titled “Idillio” (1944) as “Lady, Anemone”. This was first published in New Directions 9 (1946), pages 82-83, as the last in a sequence of three poems, followed by the dateline “Lake Chapala, Jalisco, Mexico, July 1945″. [3]

Other links between Tennessee Williams and Mexico

Later in his life, Tennessee Williams turned one of his short stories into the stage play The Night of the Iguana (1948), also set in Mexico. In The Night of the Iguana, a defrocked clergyman is leading a ladies’ bus tour around Mexico. The group is forced to take temporary refuge in a hotel whose owner proves to be especially sensual. The main characters become entangled in a web of relationships. They eventually manage to move on, but not before a captured iguana has been fattened for the dinner table.

The 1964 film adaptation of The Night of the Iguana, directed by John Huston, starred Richard Burton, Ava Gardner and Deborah Kerr. The movie set was built on Mismaloya Cove, a short distance south of Puerto Vallarta. The film won the Academy Award for Best Costume Design, and was also nominated for Best Supporting Actress, Cinematography and for Art Direction.