Sometimes amateur artists paint something close to unique. Jim Byers, born in about 1940, first visited Lake Chapala in 1960 after graduating from Berkeley High School, California. He remained in Mexico for three years before returning north to study for a degree in Comparative Literature at the University of California, Berkeley.

For part of this first extended visit to Mexico, Byers lived at the extensive property in San Antonio Tlayacapan, known as El Manglar, where President Díaz stayed on several occasions in the 1900s, paying the princely sum of $18 a month for room and board. 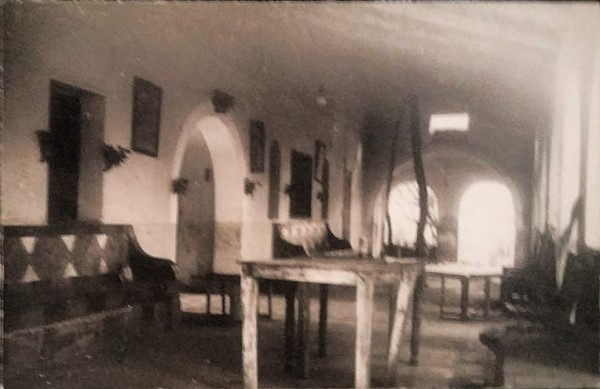 It was at El Manglar that Byers took this photograph of where he was living and completed a painting of the same scene. While Byers had no pretensions as a visual artist, his 1961 painting of El Manglar is the only one I’m currently aware of. Byers explained to me that,

“It’s a one of a kind. I painted it when I was young and had had a couple of art classes as a teenager. I am glad you like it. It was here in Ajijic when I was maybe 19 years old.” He then went on to point out that “the guy on the bench is Montgomery Clift playing Freud in a movie, the skeleton is the Mona Lisa… the guy flying is of course the artist.” 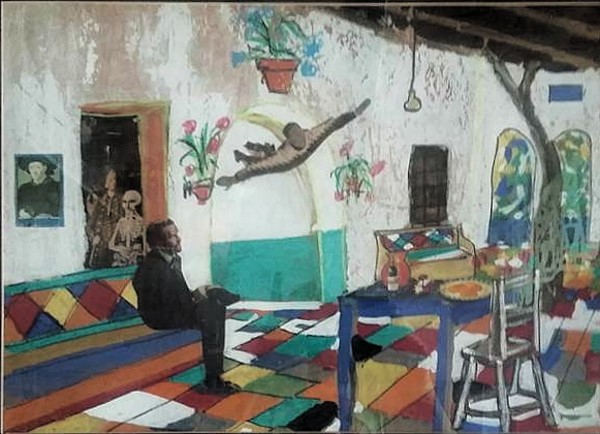 El Manglar is also associated with American artist Everett Gee Jackson. Shortly after their marriage in 1926, Jackson and his wife, Eileen, rented it and lived their with a couple of friends for several months. Jackson described El Manglar’s extensive grounds and idiosyncratic decorations:

Eileen and I took the large music room, with its shining tile floor, for our bedroom. We thought it must have been the old dictator’s music room, since it had cupids playing musical instruments painting on the ceiling.“

Staying at El Manglar for at least part of the time Byers was there, was Grant Risdon, a student at the San Francisco Art Institute who was a frequent visitor to Chapala. An encounter with Risdon and Byers in 1962 left an indelible impression on Doctor Avis, as recounted by Dayton Lummis in Spaceships and Liquor: Venus and Mars Are All Right Tonight. According to Lummis: “Ajijic was then, 1962, just barely beginning to be discovered, mostly by a few beatniks and adventurers” when Doctor Avis got out of the army and decided to stay there a few days:

“Not long after getting off the bus in Ajijic he fell in with two American chaps, Jim Byers and Grant Risdon from Chicago, who playfully called himself “Pancho Napoleon Anaya… These two chaps directed the Doctor to some cheap lodging and then suggested they buy some of the locally available and very cheap marijuana, or mota, to assist them in getting through the afternoon…”

Jim’s drug of choice, however, was not mota or painting but playing classical guitar. In his own words,

“I came here in 1960 when I got out of high school. I decided to hitchhike South and kept going. I’m a classical guitarist and was very very good friends with Gustavo Sendis and Geoffrey Goodridge. Gustavo lived with my family for maybe a year in Berkeley and I knew Geoffrey because he was a student at Cal as well although I met him down here in Ajijic. So we were all very tight for some years. Beautiful beautiful men.”

During his later years living in Chapala (Jim Byers died in 2018), he continued to perform, often as an accompanist to singers, and acted as mentor to the next generation of musicians, including guitarist Ernie Lara. When Rosheger, Byer’s own mentor, visited him in Chapala in 2008, he composed a short piece titled “Clear Southern Sky,” which he dedicated to his host. Lara subsequently gave the world première performance of this piece at the Centro Cultural González Gallo in Chapala in 2021.

Like Jim Byers, both Gustavo Sendis and Geoffrey Goodridge were exceptionally talented guitarists. Sendis studied in Spain and combined guitar playing with his love for visual arts, often holding joint recital-exhibitions. As an adult, Goodridge moved to Europe, adopted the name Azul and gained renown as a professional flamenco guitarist.

The story of El Manglar is told in chapter 34 of If Walls Could Talk: Chapala’s Historic Buildings and Their Former Occupants.

The musical history of Ajijic is the subject of chapter 38 of Foreign Footprints in Ajijic: Decades of Change in a Mexican Village.