Fred Lape, born at Holland Patent, about 10 miles north of Utica, New York, in 1900, spent several months every winter from about 1966 until his death in 1985, in Jocotepec on Lake Chapala. He died in Jocotepec on 1 March 1985, aged 85, and was interred in the local cemetery the following day. 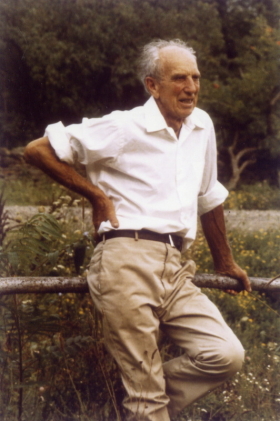 Lape attended Cornell University and received a degree in English literature in 1921. He then divided his time between teaching English as a university professor (at Cornell, Stanford and the Rensselaer Polytechnic Institute), freelance writing, running his farm, developing his skills as a horticulturist, and functioning as the historian of the small town of Esperance (population 2000), his chosen place of residence in Schoharie County, New York.

In 1951 Lape, who never married, transformed the family farm into the non-profit George Landis Arboretum. The arboretum’s website states his mission: “He aimed to grow every species of woody plant from temperate regions around the world that would survive in the hills of Schoharie County.” Fred Lape served as its director until his death. The arboretum closed every year from 1 November to 1 April, allowing him ample time each winter in Jocotepec.

His great love was guiding visitors around the arboretum. His obituary in The Altamont Enterprise describes how, “The arboretum director, a tall, angular figure topped by a plain, undecorated wide-brimmed  straw hat shielding a craggy, deeply-tanned face, would lead visitors past that landmark on regular weekend woodlot tours.”