He is most often associated with the Santa Fe art community, but also traveled widely on assignment. Knee was a talented photographer who first visited Santa Fe in 1931; he fell in love with the location, and eventually became part of the flourishing art community there. Knee’s friends included a wide circle of famous artists and photographers, including Edward Weston, Gustave Baumann, Ansel Adams, Georgia O’Keeffe and Laura Gilpin. 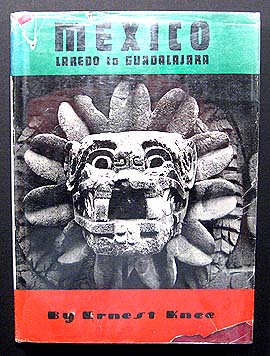 Over 100 of his powerful black and white photographs were the subject-matter for Ernest Knee in New Mexico: Photographs, 1930s-1940s, by his third son Dana Knee, published by the Museum of New Mexico Press in 2005. One of these photographs, dated 1941, depicts a lone sail boat on Lake Chapala, though it is unclear how much time he spent in Chapala.

A photograph of Chapala is also included in his Mexico: Laredo to Guadalajara (Hastings, New York, 1951). This book showcases more than 100 of his photographs, documenting a pictorial tour from Laredo to Monterrey, Linares, Villagran, Tamazunchale, Jacala, Venta de Carpio, Toluca, Morelia, Patzcuaro, Zamora, Chapala and Guadalajara.

Three of his images of Chapala can be seen on artworld.

Among Knee’s many other claims to fame is that he was, for a time, Howard Hughes’ personal photographer. He was also the first cameraman to record Angel Falls in Venezuela. His landscape and documentary photographs appeared in Life and National Geographic.