Leanne Averbach is a Canadian writer, performance poet and experimental filmmaker, whose first collection of poems, fever (Mansfield Press, 2005; 79 pp) includes a mention of Chapala in the final stanza:

Here, in Chapala, Mexico,
where the poverty is general
my secrets do not translate
that well. 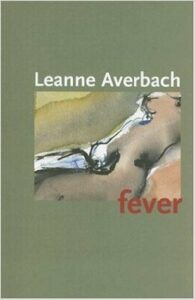 We do not currently know more about the circumstances or timing of her visit or visits to Chapala.

American poet ruth weiss, who also has connections to Ajijic and Chapala, became famous for reciting her poetry to live jazz, and Averbach does the same. A companion CD fever is a fusion of her spoken words with the blues/jazz accompaniment of Astrid Sars’ band Indigo.

Averbach was awarded an MA from Simon Fraser University in British Columbia and also holds an MFA from The New School, New York. She has taught at the University of British Columbia Language Institute and has performed her poetry to live jazz in Canada, New York and Italy.