Painter and interior designer Nancy Harris Ocrant was born in Buffalo, New York, on 4 September 1931, and died in Denver, Colorado on 9 February 2012. She was a seasonal visitor to Mexico from Denver, first (in the early 1980s) to the resort city of Mazatlán, and then (from about 2000) to the village of Ajijic on Lake Chapala. 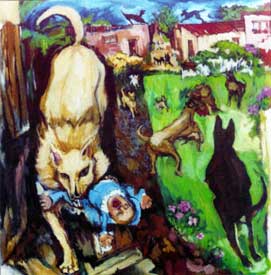 She married Lawrence Ocrant in 1951. The couple, who divorced in 1971, had three children, one of whom predeceased her.

Nancy Ocrant studied at the Edinburgh Art Institute in Scotland. In 1952, her work was included in a group show “Contemporary Texas Painters” in Miami Beach, Florida. In 1953, she graduated from Syracuse University, New York, with a Bachelor of Fine Arts in painting and illustration. She was appointed as an art professor at the University of Illinois.

She visited Israel in 1970 and later lived there for a short time. In Denver, she taught interior design at Colorado Institute of Art, had her own studio on Pearl Street, put on several gallery shows and also designed restaurants, offices and homes.

In Ajijic, she focused on her art and photography and shared a studio-gallery there with award-winning sculptor Estella Hidalgo. Ocrant worked in oils and watercolors, but considered that her strongest talent was drawing. She executed some powerful, passionate drawings which speak for themselves.

[Months after their divorce in 1971, her ex-husband, Lawrence Ocrant, married his personal assistant, the former cheerleader Sueann “Susie” Adair. In 1984, Susie found him dead, in mysterious circumstances, at their home in an affluent suburb of Denver. Despite being initially ruled a suicide, his two children (from the first marriage) got the case reopened in federal civil court, though only after the statute of limitations had expired. A federal court threw out the suicide verdict and ruled that Lawrence Ocrant had been murdered, and that the police had covered it up.]