Dudley Francis Kuzell, husband of Betty Kuzell, was a baritone in the well-known The Guardsmen quartet. The Kuzells lived at Lake Chapala for many years, from the early 1960s.

Kuzell (sometimes Kuzelle) was born in Cleveland, Ohio on 21 June 1896 and died in Guadalajara on 14 May 1969. He was a track athlete at Stanford University (class of 1919), but did not graduate, owing to registering for U.S. military duty near the end of World War 1. (The Stanford Daily, 28 April 1927). After military service, he settled in California making his living by acting and singing.

As a singer, he was a member of the Ken Lane Singers and The Guardsmen quartet. The Ken Lane Singers accompanied Frank Sinatra on several occasions, including a 1945 recording of America the Beautiful; Silent Night, Holy Night; The Moon was Yellow; and I only Have Eyes for You, and for a 1947 recording that included It Came Upon the Midnight Clear; O little Town of Bethlehem; and the iconic White Christmas. 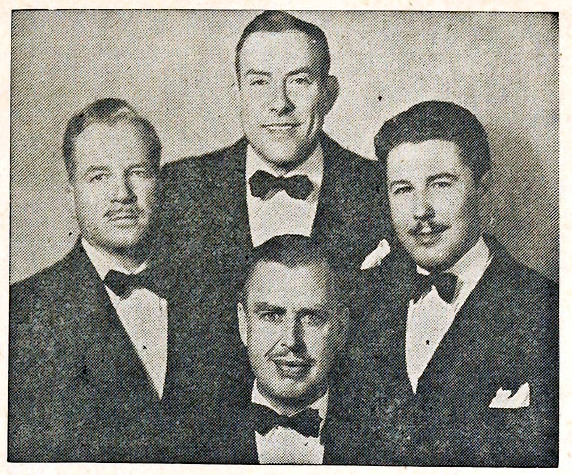 The all-male quartet The Guardsmen performed hundreds of concerts throughout the U.S., Canada and Mexico, as well as many radio broadcasts. The quartet sang on the sound tracks of more than 800 motion pictures from the 1930s to the 1950s. These movies included Walt Disney’s Snow White and the Seven Dwarfs (1937), where the quartet were four of the dwarfs.

During their “retirement” at Lake Chapala, the Kuzells were famous for their musical evenings, and instrumental in the founding of the Lakeside Little Theater.