William R. (“Bill”) Evans was born on 10 April 1923 in Oak Park, Illinois and had a distinguished military career and life in public service. He and his wife Irene lived for several years in Chapala in the 1960s. According to their long-time friend Bill Atkinson, Evans had already written his first book Kora! before arriving in Chapala in 1963, and then wrote his second book Soochow and the 4th Marines during his time at Lake Chapala. Both books were memoirs and were eventually published in the 1980s. 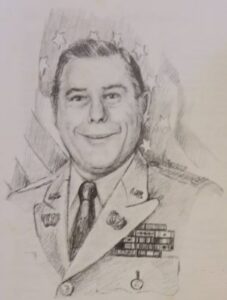 Evans served in the U.S. Army from 1941 to 1963. During the second world war he was a survivor of the Bataan Death March (the subject of Kora!) after the Japanese took the Philippines. Evans spent 42 months in Japanese prison camps until liberated in 1945.

Atkinson recalls Evans as having a wonderful sense of humor, and accustomed to labeling his three and half years hard labor in the coal mines of Japan as his “four years as a guest in the Orient”.

Following the war, Evans remained in the army. He worked as chief warrant officer in the criminal investigation division of the office of provost marshal general, and at the time he retired from the army in 1963, he was commanding officer of the 16th CID in Paris.

Evans’ second book Soochow and the 4th Marines (Atwood Publications, 1987) tells the true story of the 4th Marines in parallel with the dog Soochow, a Chinese mongrel they adopted as their mascot in Shanghai in 1937. The book describes how Soochow had become accustomed to a pampered life, riding around Shanghai wearing one of three tailor-made uniforms in rickshaws pulled by coolies, eating sirloin steaks and drinking beer with fellow Marines. Then, things changed.

Soochow was a prisoner of war from May 1942 to February 1945 but managed to survive, living off scraps since he was not entitled to his own rations. While he survived, many of his fellow marines did not. After the war, Soochow was taken back to the U.S. where he served as the mascot of the U.S. Marine Corps in San Diego until his death in 1948.

After leaving the service in 1963, Evans spent several years in Mexico, but later took a post with the American Automobile Association (AAA) in San Antonio, Texas.

My sincere thanks to Bill Atkinson for sharing some of his memories of Bill Evans with me in April 2016.