By the end of April, Lawrence was becoming restless and actively looking for somewhere where he could write. The traveling party had an open invitation to visit Guadalajara, the home of Idella Purnell, a former student of Bynner’s at the Univeristy of California, Berkeley. After reading about Chapala in Terry’s Guide to Mexico, Lawrence decided to  catch the train to Guadalajara and then explore the lakeside village of Chapala for himself.

Lawrence liked what he saw and, within hours of arriving in Chapala, he sent an urgent telegram back to Mexico City pronouncing Chapala “paradise” and urging the others to join him there immediately. Lawrence and his wife Frieda soon established their home for the summer in Chapala, on Calle Zaragoza. In a letter back to two Danish friends in Taos, Lawrence described both the house and the village:

“Here we are, in our own house—a long house with no upstairs—shut in by trees on two sides.—We live on a wide verandah, flowers round—it is fairly hot—I spend the day in trousers and shirt, barefoot—have a Mexican woman, Isabel, to look after us—very nice. Just outside the gate the big Lake of Chapala—40 miles long, 20 miles wide. We can’t see the lake, because the trees shut us in. But we walk out in a wrap to bathe.—There are camions—Ford omnibuses—to Guadalajara—2 hours. Chapala village is small with a market place with trees and Indians in big hats. Also three hotels, because this is a tiny holiday place for Guadalajara. I hope you’ll get down, I’m sure you’d like painting here.—It may be that even yet I’ll have my little hacienda and grow bananas and oranges.” – (letter dated 3 May 1923, to Kai Gotzsche and Knud Merrild, quoted in Knud Merrild’s book, A Poet and Two Painters: A Memoir of D.H. Lawrence.) 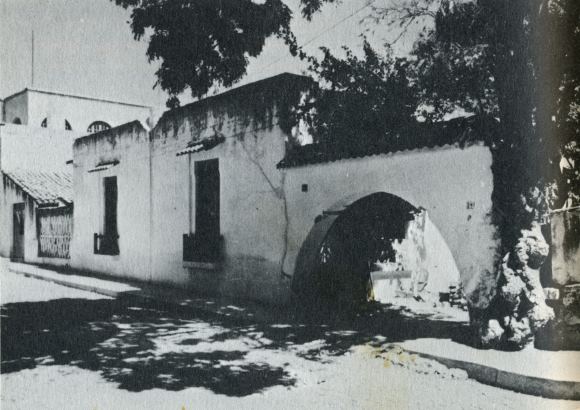 Life was not without its incidents and travails. Frieda, especially, was unconvinced about the charms of Chapala:

Lawrence went to Guadalajara and found a house with a patio on the Lake of Chapala. There, Lawrence began to write his “Plumed Serpent”. He sat by the lake under a pepper tree writing it. The lake was curious with its white water. My enthusiasm for bathing in it faded considerably when one morning a huge snake rose yards high, it seemed to me, only a few feet away. At the end of the patio, we had the family that Lawrence describes in the “Plumed Serpent”, and all the life of Chapala. I tried my one attempt at civilizing those Mexican children, but when they asked me one day, “Do you have lice too, Niña,” I had enough and gave up in a rage. At night I was frightened of bandits and we had one of the sons of the cook sleeping outside our bedroom door with a loaded revolver, but he snored so fiercely that I wasn’t sure whether the fear of bandits wasn’t preferable. We quite sank into the patio life. Bynner and Spud came every afternoon, and I remember Bynner saying to me one day, while he was mixing a cocktail: “If you and Lawrence quarrel, why don’t you hit first?” I took the advice and the next time Lawrence was cross, I rose to the occasion and got out of my Mexican indifference and flew at him.  – (Frieda Lawrence: (1934), Not I, But the Wind… Viking Press, New York (1934), p 139)

The house the Lawrences rented was at Zaragoza #4 (since renumbered Zaragoza #307) and became the basis for the description of Kate’s living quarters in The Plumed Serpent. The Lawrences lived in the house from the start of May 1923 to about 9 July that year.

Interestingly, the house subsequently had several additional links to famous writers and artists.

Immediately after the Lawrences departed, the next renters were American artists Everett Gee Jackson and Lowell Houser, who lived there for 18 months. They did not realize the identity of the previous tenant – “an English writer” –  until the following year. Their time in Chapala is described, with great wit and charm, in Jackson’s Burros and Paintbrushes (University of Texas Press, 1985).

[Jackson visited Mexico many times and made several return visits to Chapala, including one in 1968 when he, his wife and young grandson, “rented the charming old Witter Bynner house right in the center of the village of Chapala. It had become the property of Peter Hurd, the artist…” In 1923, Bynner and Johnson stayed at the Hotel Arzapalo. In 1930, Bynner bought a home in Chapala (not the one rented by Lawrence) and was a frequent winter visitor for many years.] 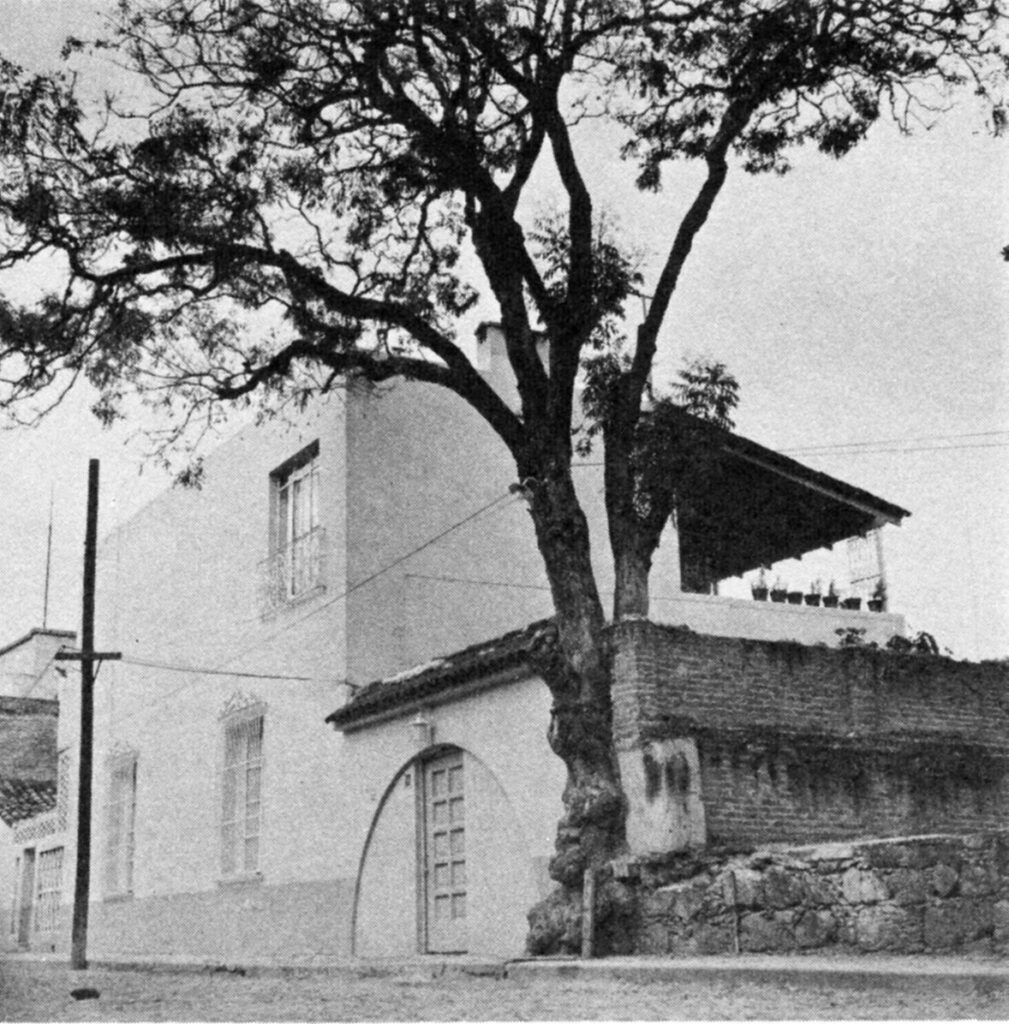 Over the years, the house on Zaragoza that Lawrence and Frieda had occupied was extensively remodeled and expanded. The first major renovation was undertaken in about 1940 by famed Mexican architect Luis Barragán. Another large-scale renovation took place after the house was acquired in 1954 by American artist and architect Roy MacNicol (mistakenly spelled MacNichol in Moore’s The Collected Letters of D.H. Lawrence). 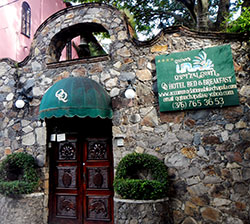 In 1978, Quinta Quetzalcoatl was acquired by a Californian couple, Dick and Barbi Henderson. Dick, a contractor, and Babri, an interior designer, set about restoring the building to accommodate friends visiting from the U.S. In 1982, the Hendersons purchased the adjoining lot to build two additional units and extend the gardens. When they ran Quinta Quetzalcoatl as a boutique bed and breakfast, it had eight luxury suites.

In the late 1970s, Canadian poet Al Purdy, a great admirer of Lawrence (to the point of having a bust of Lawrence on the hall table of his home in Ontario), wrote a hand-signed and numbered book, The D.H. Lawrence House at Chapala, published by The Paget Press in 1980, as a limited edition of 44 copies. The book includes a photograph, taken by Purdy’s wife Eurithe, of the plumed serpent tile work above the door of the Lawrence house.

The town of Chapala today would be totally unrecognizable to Lawrence, but the home where he spent a productive summer writing the first draft of The Plumed Serpent eventually became the Quinta Quetzalcoatl, an exclusive boutique hotel.