Spanish-born artist José Arpa Perea (1858-1952), José Arpa to English-speakers, worked in Spain, Mexico and Texas. From his native Spain, Arpa arrived in Mexico in 1895. When the Mexican Revolution began in 1910 he relocated to San Antonio, Texas. Arpa made frequent trips back to Spain, and in 1931, returned to live and work there.

We know he spent some time in Chapala on account of this beautiful oil painting of Chapala, Mexico, sold at auction in 2006 for $24,000. Arpa specialized in landscapes (with occasional portraits), and we know that he painted in various parts of Mexico, predominantly central Mexico. 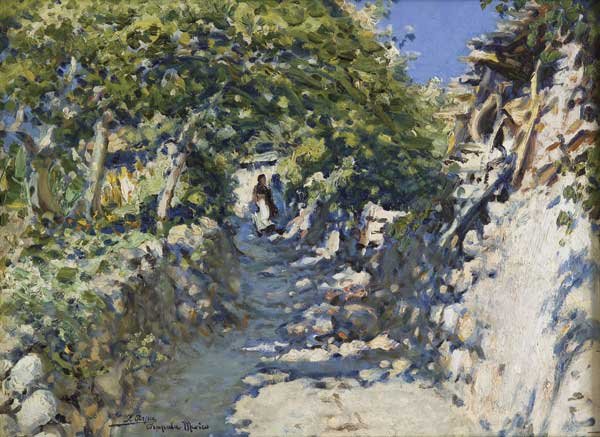 Born in Carmona, Spain, Arpa first studied art in 1876 under Eduardo Cano de la Peña at the Museum of Fine Arts in Seville. He also studied in Rome, Italy (1883-1886). His paintings are pre-impressionist in style, and his best works rely on brilliant colors and a particular skill in depicting the effects of sunlight. Four of his canvases were exhibited, on behalf of Spain, at the Chicago World’s Fair in 1893.

In 1895, Arpa traveled to Morocco, and then to Mexico. It is possible that his decision to live in Mexico was on account of previous meetings in Seville with members of two Spanish families – Rivero and Quijano – who were residents of Puebla, Mexico. Arpa declined an invitation to become director of Mexico’s Academy of Fine Arts, and worked independently, painting the local landscapes and customs. 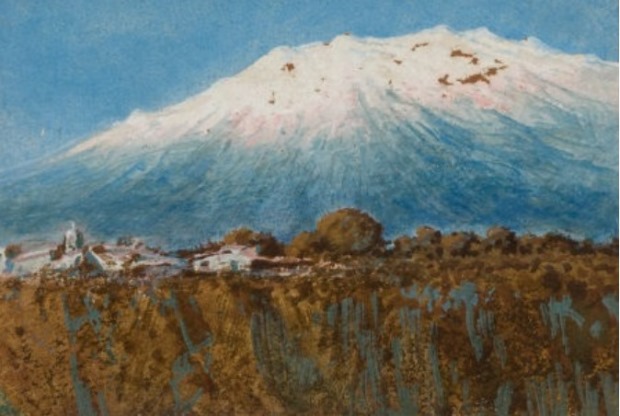 Arpa spent time in Jalapa, Veracruz, a city of some artistic renown at that time, and had several works accepted for the XXIII Exhibition of the National Fine Arts School (Escuela Nacional de Bellas Artes) in Mexico City, which opened in January 1899.

In Puebla, Arpa undertook the interior decoration of several city homes. He had painted several murals previously in Spain, but apparently none of them survive, whereas some of his Neo-Mudéjar (Moorish Revival) stucco and mural work in Puebla still exist.

In Texas (after the Mexican Revolution began in 1910) Arpa established his studio in San Antonio and painted the rivers, flowers and rich, blue skies of the Texas Hill Country. His work influenced many painters in Texas, including Xavier Gonzalez (his nephew, and assistant in drawing classes), Octavio Medellín, and Porfirio Salinas.

Arpa’s work has been widely exhibited and won many awards. Ten of his paintings are in the permanent collection of the San Antonio Museum of Art. In 2015, the Museum held a major exhibition of his works, entitled “The Three Worlds of José Arpa y Perea: Spain, Mexico, and San Antonio”.

Previously, in 1998, a major retrospective of his paintings, including some of his American works, had been held in Seville, the city where he spent his final years.