Painter, lecturer and art critic Stanley Belden Lothrop (1881–1944) lived the last two years of his life in Chapala. Lothrop, the younger of two brothers, was born in Newton, Massachusetts on 6 July 1881.

He graduated from Harvard in 1905, having studied architecture and fine art, completed a Grand Tour of Europe and was assistant curator of paintings at the Museum of Fine Arts, Boston. Lothrop spent several years in Rome, Italy, working at the American Academy as a lecturer on Renaissance and Medieval art. During the first world war, he became an official with the Red Cross, and was later decorated for this work by the Italian government.

Soon after his return to the U.S., he was hand-picked by famous American artist and designer Louis Comfort Tiffany (1848–1933) and appointed as the first executive director of the Tiffany Foundation on Long Island, New York, in October 1919. This foundation had been established in 1918 when Tiffany donated his home, Laurelton Hall, at Cold Spring Harbor, on Long Island, together with eighty acres of land, buildings and an endowment of more than a million dollars, as the basis for an art institution.

Lothrop was the liaison between the foundation’s Board of Trustees, Tiffany, and the visiting “fellows”. Lothrop lived at Laurelton Hall in “an apartment above the fellows’ section”. “He monitored their work, managed the housekeeper, kept the budget, and enforced the three limitations placed on the fellows: no models, no finished pictures, and, during the life of the founder, no entrance to the main house without permission.” [1] 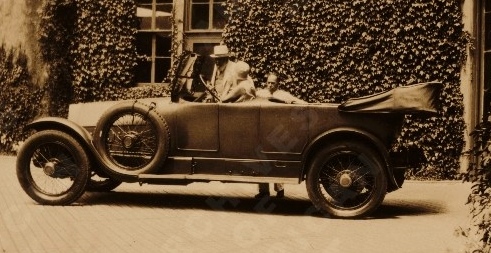 Shortly after Tiffany’s death in 1933, Lothrop left the Tiffany Foundation, and later moved to Colorado Springs, where he was director of the Colorado Springs Art Center for two years. In 1942 he retired to Chapala, where he lived the last two years of his life. He died in Chapala in March 1944.

It is unclear precisely why he chose to retire to Chapala or what prior connections he had to Mexico, but it should be noted that in the 1940s (unlike today), it was quite an unusual thing to do.