Jo Lee Rodke, later Jo Lee Storm, was an artist and art instructor, best known for her portraits and desert landscapes in oil, though she was also drew cartoons and produced lino-cuts, design, illustrations and pottery.

Rodke (the surname she used for her art) spent several winters in Ajijic in the 1960s, though the precise years remain unclear.

Born Jo Lee Wright on 22 March 1893 in Tulip (near Paris), Texas. The family moved when she was young and Jo Lee grew up in Oklahoma. She graduated from a teacher’s college in about 1929, and then began to teach in Oklahoma. When she married Leo B. Rodke, she moved to Pauls Valley, and taught at the Pauls Valley High School and at the Shawnee High School. The couple lived in Paoli, Oklahoma, and had two children: a daughter who died in infancy and a son. 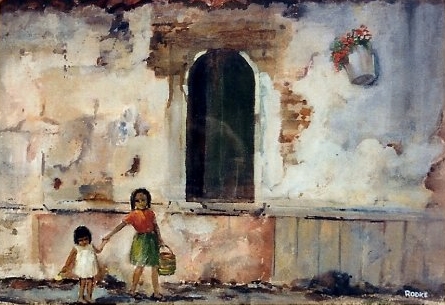 She also took classes with Martha Avey (in Oklahoma City), at Kansas City Art Institute in Missouri, at Oklahoma State University, and at at Broadmoor Art Academy in Colorado Springs, Colorado, under Randall Davey and Ernest Lawson. 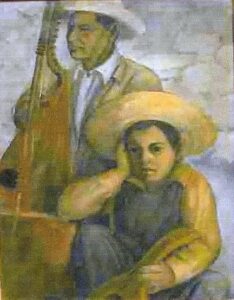 One summer, she studied art in Taos, New Mexico. In the summer of 1954, now in her early sixties, Rodke took art classes at Mexico City College, on the western outskirts of Mexico City, which had just moved to a new site alongside the Toluca highway. The College later moved to Puebla, and became La Universidad de las Américas.

In the mid-1950s, Rodke retired from teaching in Oklahoma and moved to Florence, Arizona, where she continued to paint, and give private art classes, alongside working in the Florence school system.

She married Bernard Storm in the Spring of 1960, and during the 1960s, the couple spent many winters in Ajijic on Lake Chapala, though we have so far learned very little about her work there. We do know that she was painting there during the winters of 1964-65, and 1965-66.

The Colony Reporter (Guadalajara) in April 1965 reported that she is “scheduled for a one-man show next month [May 1965] in Mesa, Arizona.” She also exhibited in Florence, Arizona, in May 1965.

The Tucson Daily Citizen for 18 December 1965 reports that “Mrs. Rodke is currently in Mexico” and that “the Philbrook Museum at Tulsa has three of her works in its permanent collection”.

Several of her Mexican paintings won prizes in exhibitions in Arizona, including The Vendors, a Mexican street scene which won a prize for oils in 1967, and Blue Madona (sic) which won a Gold Cup. The accompanying caption to the photograph of that achievement said that Rodke “finds Mexico, its countryside and its people, an inexhaustible source of painting inspiration.”

Rodke is credited by her son, Robert Rodke, with having founded “artist colonies at Teluride, Colorado, and Lake Chapala, Mexico”. The former may well be correct, but the pioneers of the art colony at Lake Chapala certainly predated Rodke’s first visit there by many a long year!

Rodke held numerous exhibitions, and was a regular participant in the annual shows of the Association of Oklahoma Artists (of which she became president), the Mesa Art League and other groups, including the Midwestern Artists Association in Kansas City. Two oil portraits, Indian Girl and Young Dancer were chosen for a group show at the College Art Association in New York City.

Rodke gained many “Best of Show” and “purchase” awards at local, state and regional exhibitions, and her work can be found in many private and public collections, including the Pinal County Historical Museum at Florence, Arizona and Coolidge Library in Arizona.

Jo Lee Rodke Storm took her paintbrushes to a higher plane on 13 November 1978.