Dorothy Hosmer, born in Wauwatosa, Wisconsin, in 1910, spent much of her life combining adventure and photography. She visited Ajijic with her mother for a short time in 1945, where she met, among others, artists Otto Butterlin and Sylvia Fein.

Fein recalls that Hosmer was planning to write an article about the area, with the intention of submitting it to National Geographic. In the event, Hosmer’s photo essay about a “Village in the Sun” that was “an unspoiled spot that has become a paradise for Mexican and American artists and writers” never was published by National Geographic but did appear in Modern Mexico in 1946.

Hosmer completed primary school in Wilmette, Illinois, and high school in Sarasota, Florida, before taking a year of college at Rice Institute in Houston, Texas, followed by a one year secretarial course at Scudder School, New York. She then started to work for National City Bank of New York. 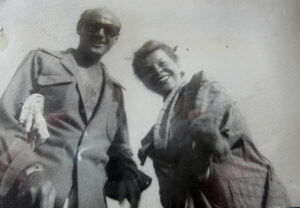 Hosmer first received public attention in November 1938, when the National Geographic published her article, “An American Girl Cycles Across Romania: Two-wheel Pilgrim Pedals the Land of Castles and Gypsies, Where Roman Empire Traces Mingle With Remnants of Oriental Migration” (National Geographic, November 1938, 557-588).  The article was illustrated by photographs Hosmer had taken during a solo bicycling ride in Europe.

Her initial break-through came about only because Gilbert H. Grosvenor, the National Geographic editor at the time, overruled an associate editor who claimed that respectable “girls” didn’t take foreign trips alone! Hosmer had written to the magazine from Florence in 1937 asking them if they would care to publish an “account of her trip with illustrative photographs.” She was paid a miserly $300 for each article, well below the rates normally offered to male contributors. (Hosmer had given up her secretarial job at National City Bank and splashed out $89 for a third-class steamer ticket in order to reach Europe.)

Hosmer was one of the first female photographers to have her work published in the National Geographic, and wrote three more articles for the magazine, also illustrated with her own photos, over the next few years.

Having traveled for more than four years, she returned to the U.S. in July 1940, on the death of her father. In June 1943, she moved to Mexico, where she lived until December 1945. She worked for a time in Mexico City as the motion picture traveling supervisor for the office of Inter-American Affairs. She traveled widely, and collected textiles as she went, a collection that is now at the San Bernardino County Museum in Redlands, California.

Hosmer spent the summer of 1945 in Guatemala, before briefly returning to Mexico (and Ajijic) en route back to the U.S., where she arrived in December 1945. The following year she studied children’s book writing at Columbia University while marketing her travel photos. In the summer of 1946, she organized a 60-day tour of Central America for Pan Pacific Good Neighbor Tours Inc.

Hosmer married Frederick Lee in Puerto Rico in 1949. Lee was either a Wall Street banker (the National Geographic version) or a New York pulp fiction writer. The couple had a son, Kerry (1950-1982). After her husband’s death from cancer, Dorothy Hosmer-Lee moved back to Redlands, California, where she served as an Educational Advisor for the U.S. Civil Service Commission at Norton Air Force Base in San Bernardino until 1971, after which she started traveling again.

Her love of travel and the outdoors was recognized in 1992 by the Los Angeles Council of American Youth Hostels who awarded her their “Spirit of Adventure Award”.

Following Hosmer’s death in 2008, friends and executors of her estate donated a substantial collection of her photographs and negatives to the Sweeney Art Gallery. The collection includes more than 40 publications and 6000 photos and negatives. It is unclear whether or not any these items relate directly to Hosmer’s visit to Lake Chapala.

One additional curiosity about Hosmer is that in 1960 she copyrighted words and music for an English-Spanish piece entitled “Tampoco”. If anyone knows this work, please let us know the details!

This post, which remains a work in progress, was originally published 14 April 2016 and has been significantly updated. I am very grateful to Emily Papavero, Associate Director, ARTSblock, at the University of California, Riverside, for so generously sharing her wealth of knowledge about Dorothy Hosmer’s life and work.