Diego José Abad (1727-1779) was a Mexican poet and author, born in Jiquilpan, Michoacán (then on the shores of Lake Chapala). His birthplace appears to be the only direct connection that he has to Lake Chapala. 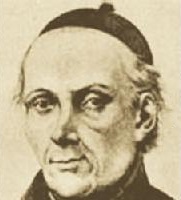 Abad, born on 1 June 1727, was the eldest son in a wealthy ranch-owning family. At twelve years of age, he entered the Colegio de San Idelfonso in Mexico City, where he took classes in grammar, poetry, rhetoric and philosophy, before joining the Jesuit order two years later in 1741. After ordination in 1751, Abad taught rhetoric, philosophy, canon law and civil law in Jesuit seminaries in Mexico City, Zacatecas and Querétaro. He was in poor health for much of his life and spent his free time translating Virgil into Spanish.