Bernard Oulie, born in Bordeaux, France, in 1943, painted at Lake Chapala in about the year 2000, before wanderlust carried them away in search of new painting locales. Since 2008, Oulie and his wife Rita have lived on a secluded island off the coast of Belize, where they are co-owners of the Huracan Diving Lodge whose guest rooms are adorned by his work.

Oulie’s paintings of Lake Chapala include works entitled Chapala-Mexico, On the road of Chapala and Chapala Al Terminar El Dia (Chapala at the end of the day), as well as “Chapala Lakes” (image). 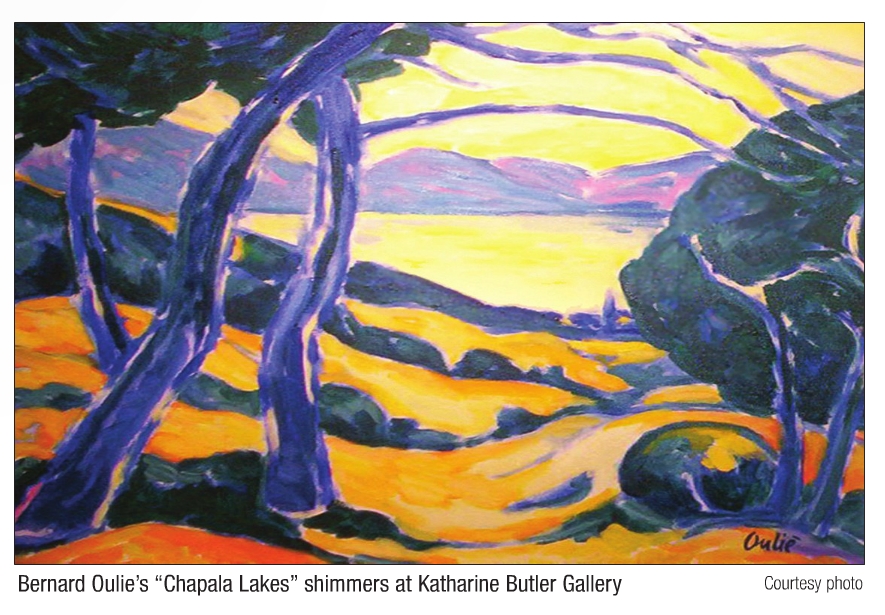 Oulie briefly attended the School of Fine Arts in Algiers before completing his education at the University of Bordeaux. For many years he was a professional wine-maker before deciding to focus on his art. He considers that his artistic influences were the post-Impressionists such as Henri Matisse, Paul Cézanne and Paul Gauguin.

This 3-minute YouTube video shows some of Oulie’s artwork:

Bernard Oulie moved to Canada in 1982 to seek locations where he could dedicate himself to his art. This drive for inspiring destinations with clarity of light and vibrant colors subsequently led him to southern Florida in 1994, and to Mexico. He has also been “artist in residence” on various cruise ships.

Oulie’s subject matter, includes natural landscapes, seascapes, historic architecture and local customs and “reflects a lifelong affinity for nature”. His paintings are characterized by brilliant colors and bold shapes. Throughout his art career, Oulie has experimented with “subtle variations of tone and form, layering constructive brushstrokes to create dimension on the canvas.”