Alan Horton Crane, aka Alan Crane (a name also used by his artist son), was an American artist, illustrator and lithographer who spent most of his life in New England, but who visited Mexico several times in the 1940s and 1950s.

Crane senior studied at the Pratt Institute with Winold Weiss and with Richard Boleslawsky at the American Laboratory Theater. He also worked with  Boleslawsky and at various other theater venues.

Weiss later used Crane as the model for one of the heads depicted in his Union Terminal mosaic mural in Cincinnati, which commemorated the broadcasting pioneers of the city. For aesthetic reasons, Weiss felt he needed someone with wavy hair to replace the head (but not the body) of radio engineer Charlie Butler, who had straight, slicked-back hair. When the Union Terminal concourse was demolished in 1974, the mural was moved to Terminal 2 at the Cincinnati/Northern Kentucky International Airport. When that building in turn was removed, the mural was relocated to the Duke Energy Convention Center. 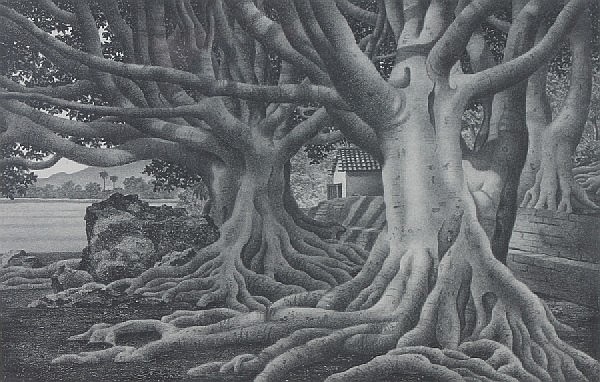 Crane exhibited widely from about 1941 to 1956 and his art won numerous awards. He also undertook illustrations for books and magazines, and wrote and illustrated several books of his own, including Pepita Bonita (1942); Gloucester Joe (1943); and Nick and Nan in Yucatan (1945). In 1956, he illustrated Elizabeth Borton de Trevino’s book A Carpet of Flowers.

Crane’s work can be found in the collections of the Library of Congress, Metropolitan Museum of Art, New York Public Library, Carnegie Institute, American Society of Arts and Letters, Brooklyn Museum, Pennsylvania State College and the Princeton Print Club.

It is unclear precisely what motivated Crane to first visit Mexico, but he visited the country several times, as witnessed by a succession of superb, finely detailed, lithographs (in editions of between 40 and 50) of Mexican scenes, including “Haunted Garden, Mexico” (1947); “Indian Laurels, Chapala” (1948); “Clouds and Spires, San Miguel Allende” (1949); “The Mirror, Camecuaro” (1952); “Shadows at Noon, Patzcuaro” (1952) and “Morning Catch, Puerto Vallarta” (1959).